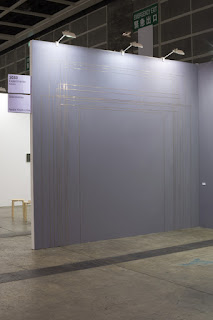 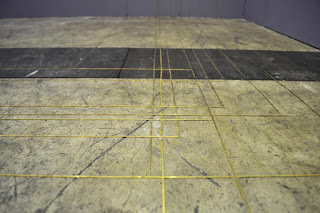 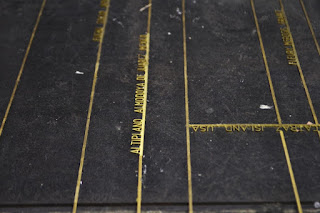 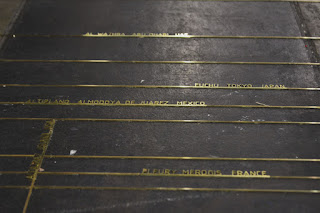 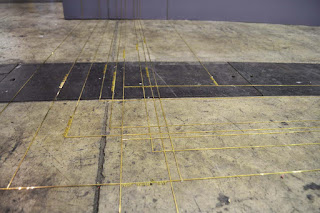 Modulor I
Installation made of brass // part of In confinement my desolate mind desires, Art | Basel Hong Kong 2014

The modulor is an anthropocentric scale invented by the Swiss born French architect and designer Le Corbusier. Its metric system is based on human measurements, Fibonacci numbers and the golden ratio. Le Corbusier himself described it as a “range of harmonious measurements to suit the human scale, universally applicable to architecture and to mechanical things.” The “harmonious measurements” were the overall height of 7.4 ft that should correspond to an adult with raised arms. The church of St. Marie de la Tourette was designed according to the modulor scale and equipped with 100 cells for monks with a height of 7.4 ft and a room width of 6 ft.

The only problem with human measurements is that there is not one global average scale. Even Le Corbusier had to realize that his initial French modulor of 5.7 ft needed to be adapted to 6 ft, because “in English detective novels, the good-looking men, such as policemen, are always six feet tall!” Thus, it was a fictional man who inspired the harmonious scale.

I got interested in the question how tall the people in the world really are. By this reason my attention was drawn to prison cells. These cells are highly rationalized spaces where no inch is wasted. I started a research and found out that the average prison cell in Germany should have a ground floor of 80 square foot, whereas the average cell in Russia has 27 square foot. Although Russia is a much larger country than Germany the people in Russia seem to be so much smaller. I got interested in getting more and more data from prison cells in different countries all over the world to compare the size of human beings. The work “Modulor” is a reconstruction of these data in order to create a visual grid that could be considered an empirical base for the global average human ratio.
Posted by Fabrizio Gallanti at 00:30