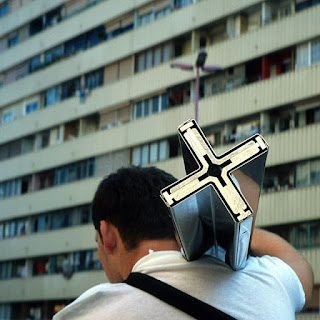 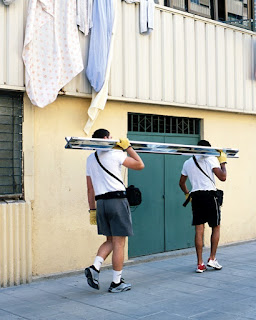 Freeload is an installation created exclusively for the Mies van der Rohe Pavilion on the occasion of the 75th anniversary of its construction. Dennis Adams has produced a portable replica of one of the eight mirrored cruciform columns that support the Pavilion. By installing a miniature video camera in each of its ends, the artist has transformed the column into a bidirectional camera designed to record forward and rear shots of a procession through La Mina, a social housing project on the outskirts of Barcelona. The route of the procession was determined by the Plataforma d’Entitats i Veïns de La Mina, a group of community representatives, and the column was carried on the shoulders of two members from the Club de Lluita Olímpica La Mina; the local wrestling club. The procession began at the boundary between the Forum and La Mina and continued through the neighbourhood, terminating at the Rambla Camarón, the symbolic center of the community. Returned to the Pavilion and installed in front of the small pool under the silent watch of Georg Kolbe’s sculpture, the column/camera is supported horizontally on two video monitors that display the recorded footage of its journey.

Adams selected La Mina for its location within Sant Adrià de Besòs, the town where the workers lived that constructed the International Exposition of 1929, including Mies’ original Pavilion. For the artist, both the Pavilion and La Mina are architectural icons that bracket the history of Modernism, framing both its utopian promise and social reality.

Since the late 1970s, Dennis Adams’ works have framed Blindzones, within public space and architecture. In relation to Freeload, Adams explains, “By exempting Mies’ column from its function as a vertical support, I envisioned the release of all that compression as a kind of extension. Turned horizontally, it becomes a sight line free to probe the physical and symbolic limits of the Pavilion.”

Posted by Fabrizio Gallanti at 00:27