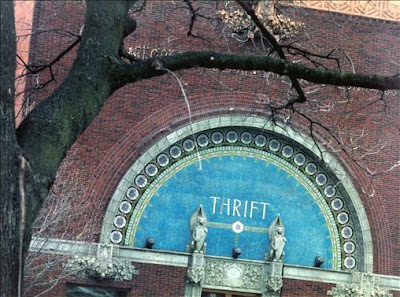 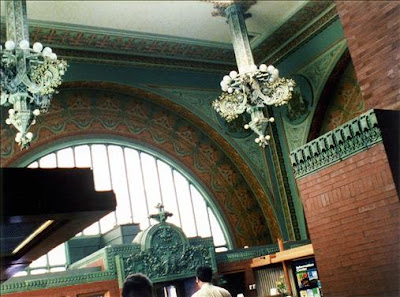 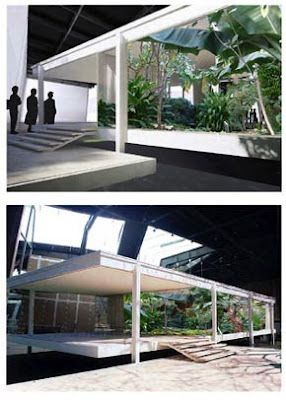 Are you really sure that a floor can’t also be a ceiling? 1

In this time of increasing globalization, not only economies, financial markets, nations and people become more and more dynamically intertwined with each other. Also the global ecological system, the biosphere, integrating all living beings and their relationships and interactions on our planet, is influenced by the continuous increase of human activities. Slowly, the world population is starting to become aware of their impact on their environment. The climate summits in Kyoto and recently in Copenhagen, where all the world leaders gather to negotiate possible solutions, are proof of that, though outcomes of these tops are still uncertain. Is it enough, is it early enough, or is it already too late?

Climate changes are clearly happening, and result - so far - in rising sea levels, melting gletchers and poles, extreme rainfalls, hurricanes and flooding, and in some areas radical changes in the seasonal patterns. This all is increasingly creating awareness among the people that something might really be changing on a global scale.

Meanwhile, modest measures are being taken on a domestic small level, on the level of national governments, and on the level of industrial production: low energy light bulbs, insulation, hybrid cars, green energy... it is not easy to negotiate financial repercussions, to force a new approach towards the production of energy and to maybe even take some steps back, while economic growth is still the magic word. If the people want to survive as a species, they will have to take some huge and radical steps to be able to bridge the concept of growth with sustainability and neutral effects. The unimaginable has to become real. A completely different way of thinking is necessary.

Butterflies are a special species: they are important economically and environmentally as agents of ‘pollination’: like bees, and some other insects and birds, they move the pollen from one plant to another. They are indispensable agents in the food chain: without them, no fertilization, and without fertilization - in the end - no life.

In recent years, a significant loss of pollinators has been noticed. In the case of bees, for example, whole colonies of bees leave their hives; they go on the run, collapse and die, and these observed losses have already significant economic impacts. Explanations for this decline include increasing urbanization (causing a lack food and longer travel times), use of pesticides, and climate change. Butterflies are considered by scientists to be ‘indicator species’ because they are particularly sensitive to environmental degradation; their decline there for serves as an ‘early warning’ on environmental conditions.

With The Farnsworth house (1951), architect Mies van der Rohe emphasized on the tight relationship between man and nature: "We should attempt to bring nature, houses, and the human being to a higher unity". It is considered one of the most radically minimalist houses ever designed. Glass walls and open interior space are the features that create an intense connection with the outdoor environment, while the exposed structure provides a framework that reduces opaque exterior walls to a minimum. Mies van der Rohe conceived the building as an indoor-outdoor architectural shelter simultaneously independent of and intertwined with the domain of nature. The Farnsworth House is located in the landscape, parallel to a river, and has been carefully maintained and restored throughout the years. In 1972, the house was restored to its original state. The house was purposely built on poles: the architect calculated the expected rise of the river, and made the elevation such that the house would able to resist flooding. Still, the past decennia, several floods heavily damaged the interior of the house, since waters have risen above the raised level six times in 60 years, caused by increased building in the surrounding area.

The concept of the butterfly effect is a term from chaos theory, to describe the sensitive (inter) dependence of different tendencies on initial conditions: how tiny variations can affect giant and complex systems. The butterfly effect suggests that the flapping wings of a butterfly represents a small change in the initial condition of the system, causing a chain of events leading to large-scale alterations of events. These small gestures eventually potentially would lead to significant repercussions on wind and movements throughout the weather systems of the world, and theoretically, could cause tornadoes around the world. True or not, had the butterfly not flapped its wings, the trajectory of the system might have been vastly different. Small actions can certainly affect change in complex systems in unexpected and unpredictable ways.

Our project brings the above-mentioned elements together in an architectural model loosely based on the design of the icon of modernism, the Farnsworth house. Instead of functioning as a dwelling, this (circa 75%) downscaled, demountable model will function as a temporary home for butterflies, as the ultimate agents for idealist ideas of transformation, change and recycling. With radical change incorporated in their life-cycle, capable of transforming from one state to another, they never are what they appear to be. The different stages of these animals of total metamorphosis can be observed and experienced in the model. Nature becomes spectacle, a spectacle inside the confinements of the museum wall.

Visitors are invited to enter the house. The glass walls of the model function both ways: giving a full view on the man-made greenhouse and its visitors wandering inside, as well as creating a link between the interior space and the museum space.

The butterflies can be purchased from special butterfly farms in Thailand and Costa Rica, thus contributing to the protection of natural habitat in these parts of the world: areas of tropical land that might otherwise be deforested produce a new value through breeding and trade of tropical butterflies without exhausting natural resources or causing severe ecological damage. These butterfly farms generate new sources of income and employment for the often-poor local population, and since it is, by nature, environmentally friendly, it is a sustainable alternative to agriculture.

The environment inside the model will be made in collaboration with local specialists and through a leasing program of tropical plants, which can be returned after the end of the installation. A preferably local keeper will take care of the butterflies and the environment. The energy used for this project obviously should be ‘green’; this has to be represented by a contract by Enel.

The title of the work, Are you really sure that a floor can’t also be a ceiling?, is made as a neon piece on the wall, thus functioning as a footnote or reference to the installation

Posted by Fabrizio Gallanti at 19:08 No comments: 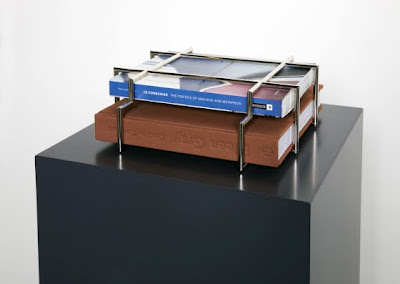 Is there anybody there, asks a traveller, passing through the E.1027 door… The odd name belongs to a key Modernist house at Cap Martin, France, designed by Eileen Gray, and the traveller is the Canadian artist Paulette Phillips. In her current show Shaky Legs at Danielle Arnaud’s gallery, she explores not just the house, but a strange drama that played out there with three of Modernism’s greatest minds – Gray, her lover Jean Badovici, and Le Corbusier. She feels the house is haunted, and she is searching for ghosts.

Phillips is an associate professor at the Ontario College of Art and Design and her art has explored architecture elsewhere – Shaky Legs, for example, includes an animated CGI of Tatlin’s Monument to the Third International with a soundtrack of Toronto street voices and stirring Soviet-style music. But the show is really about E.1027, and to understand her interest in it, it is better to know its history.

Irish-born aristocratic Eileen Gray was a Modernist furniture designer who lived and worked in Paris from 1912. In 1925, she and her lover Badovici, influential editor of the avante-garde l’Architecture Vivante, found the spot near Monte Carlo to build their summer house. She laughed at his suggestion that she design it, but she took up the challenge. The result was a rectilinear Modernist masterpiece shaped by the sea below it. A spacious living room with full-height windows and a long balcony hung above the sea like a boat deck, supported by piloti. Innovations included an internal spiral staircase and an external one to the balcony. Gray designed every aspect of the furniture and décor, including the iconic ocean-liner-inspired Transat chair, and created inscriptions like ‘Entrez Lentement’ and ‘Defense d’rire’ which suggest the spirit of retreat within, if not more. The name E.1027 encodes her and Badovici’s initials.

Le Corbusier stayed, but his matey rapport with Badovici seemed to have sidelined Gray. She abandoned E.1027 to Badovici in 1932 to design her own house and return to intimate female friends in Paris (where she died in 1976). But Le Corbusier could not stay away, and created murals around the house in 1938-40. There are seven colourful abstractions and a Picasso-esque drawing he called Graffiti at Cap Martin. Gray considered these acts of vandalism and urged their removal, but they remained. Long after Badovici’s death in 1956, a new owner, Peter Kägi, flogged off her furniture, and in 1986, was murdered there, by the gardener. The house was abandoned, and squatters left their mark. 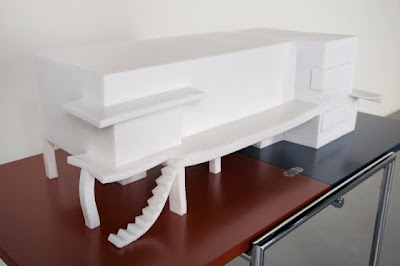 Her extraordinary half-hour film, Shell, made in 2008, explores forensically the abandonment and decay of E.1027. Here is a real Life After People but with something else. Cracks in the walls and the rust in the pipes and ironwork take on meaning – Phillips suggests that the house is ‘crumbling as a result of two discordant energies’. And perhaps the ghost of Le Corbusier is out there, in the crashing of the waves directly below, where he died swimming in 1965. Perhaps even Kägi’s spirit drifts in the limbo of lush plants growing around the house.

Phillips represents the key discord in Touché, a work mounted on a plinth in which a book on Le Corbusier floats above one on Gray by magnetic repulsion, both constrained in a cage. But she also captures something of happier days in three prints, which montage elements from the house, and this year, she has modelled E.1027 in silicone. The Rubber House seems almost like a small Rachel Whiteread cast, but it’s a positive exterior rather than a negative interior. Whiteread, she says, is ‘working with scale and monumentality, I’m working with materiality’. Her model is soft, so that the exterior staircase bends, like a ‘shaky leg’. Phillips expands on this: ‘Materials have agency and this wiggly sculpture suggests performativity… I am suggesting through the pliability of the material I used that this house is flexible, malleable and not a rigid form.’

Did Phillips find her ghosts? Le Corbusier’s may linger in the social control of sink estates across the globe, but Shaky Legs exposes another dark side to his architectural genius- jealousy. No matter that Gray opposed Le Corbusier’s idea of a house as a machine for living, he was so obsessed by E.1027 that he seemed to be trying to appropriate it. His murals defied her and stole the visitor’s attention from the purity of her design. He trumpeted them as ‘an immense transformation, a spiritual value introduced throughout’ and he wanted to have the house so that they remained as part of his protected legacy. He built his celebrated Cabanon shed nearby in 1952, and even designed a two-storey hostel, built later above it, as if to dominate it.

France has since undertaken E.1027’s restoration, preserving Gray’s and Le Corbusier’s legacy there. Phillips reminds us that architecture should be more than form, function and style – it is a play of mind to create space for life, exactly Gray’s ethos. And as an artist, she expresses something a historian could not – that sometimes, drama can make design a repository for lost spirits.

Posted by Fabrizio Gallanti at 19:01 No comments: