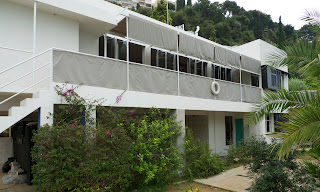 'Talking House' is a 40-minute montage of Villa E-1027, the iconic modernist villa built by Eileen Gray and Jean Badovici on the Cote d’Azur in 1929. Filmed today, and using Eileen Gray’s 1929 photographs of the villa and recently restored Le Corbusier film footage, the camera takes us through E-1027 as the couple talks and argues off screen about the design philosophy behind the breakthrough layout, interiors and furniture. Heated correspondence between Corbu (Le Corbusier) and Bado (Badovici) adds a bit of controversy over the later addition of Corbu’s wall paintings.

Posted by Fabrizio Gallanti at 16:48 No comments: