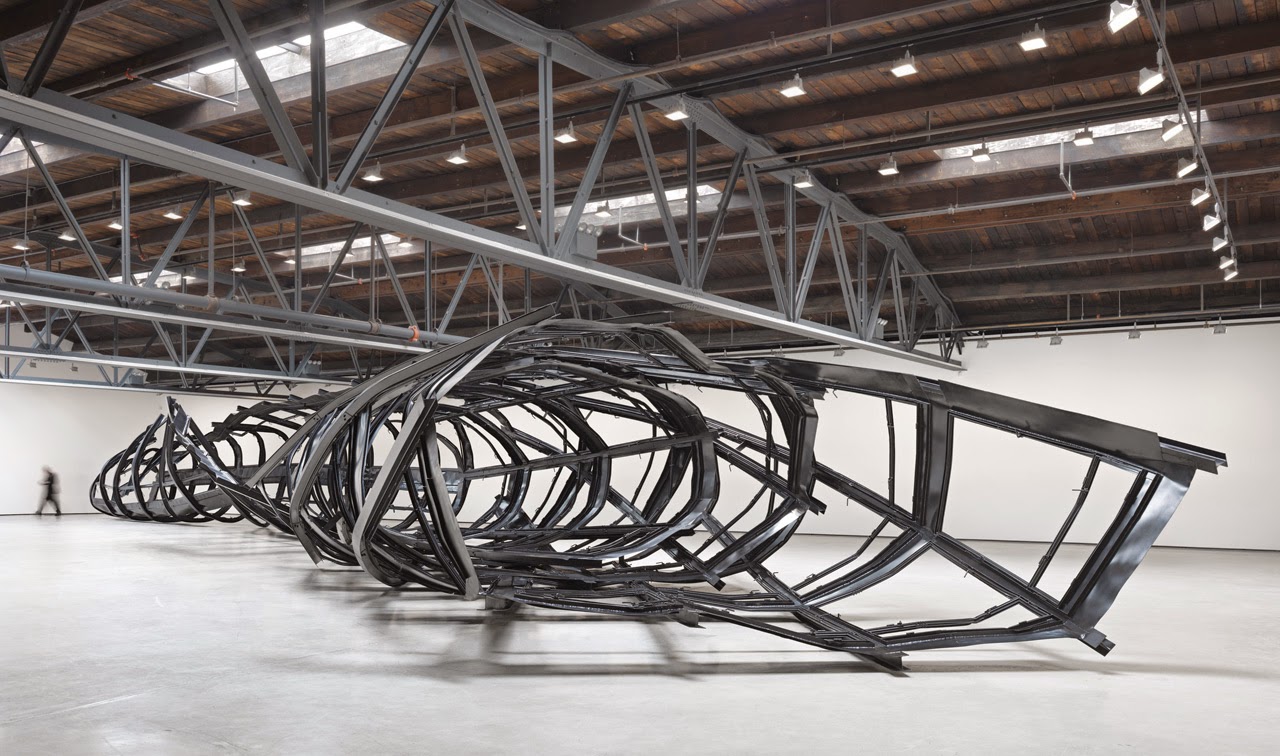 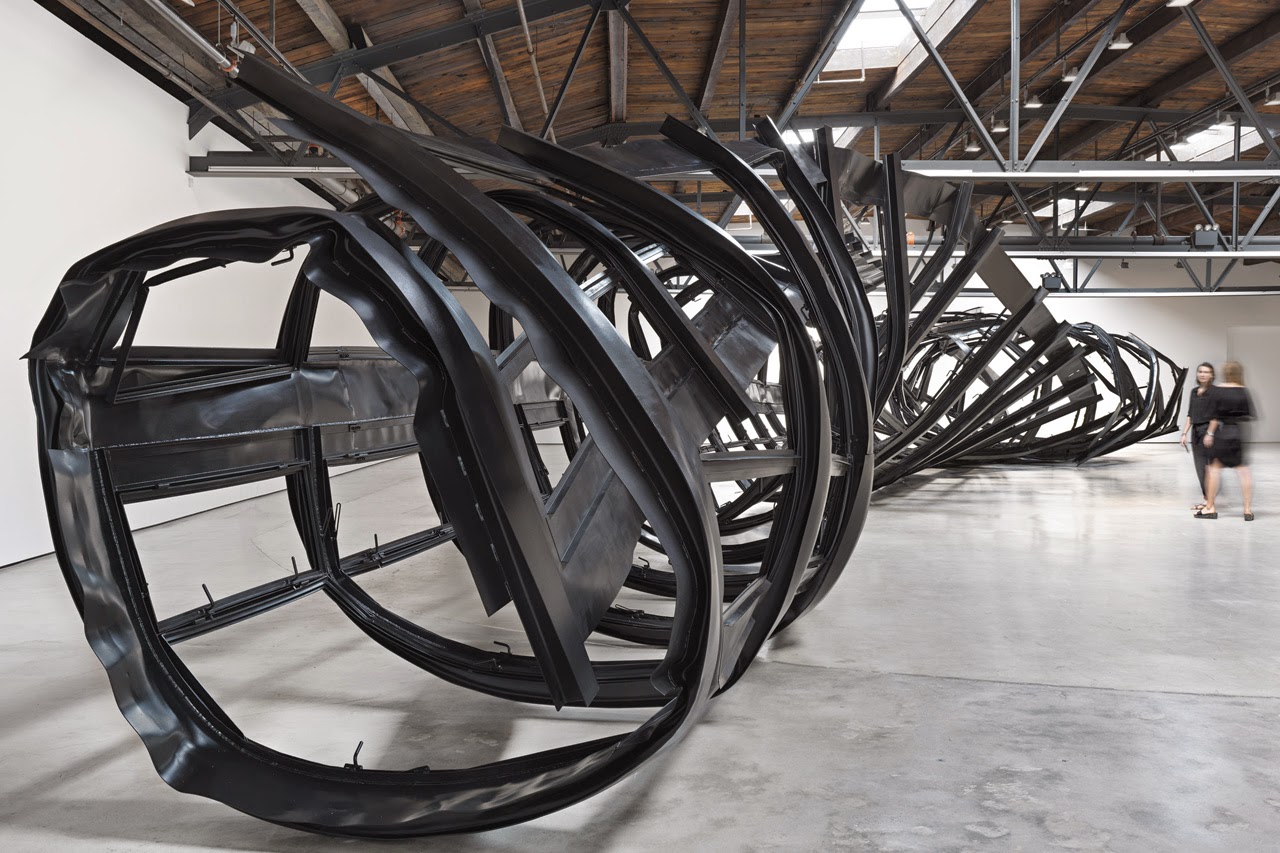 New York, NY… Hauser & Wirth is proud to present Monika Sosnowska’s ‘Tower’, a mammoth new work that conjoins architecture and sculpture in order to explore the politics and poetics of space. Known for large-scale, site-specific installations, Sosnowska creates psychologically charged art rooted in existing structures and influenced by the built environment. She manipulates forms – collapsing, twisting, and squeezing steel – into disorienting configurations that not only alter perceptions of physical space but challenge our certainties about memory and our assumptions about societal structures.
‘Tower’ will be on view from 5 September through 25 October at Hauser & Wirth’s downtown gallery at 511 West 18th Street.
For over a decade, Monika Sosnowska has amassed a documentary archive of visual material, mostly photographs made during her walks around her native Warsaw. Recording the conditions of everyday life in Poland, she captures architectural details and structures – workshops, apartment blocks, abandoned buildings, demolition sites, forgotten places – that reflect the heritage, upheaval, stagnation, and rebuilding of the city and the nation’s Communist past. Imbuing a kind of cultural memory in her oeuvre, Sosnowska makes sculpture that manifests recollections, both individual and collective, that collide where ‘architectural space begins to take on the characteristics of mental space’. Her formal language echoes different contradictory modernisms: that of Polish constructivism of the 1930s, the minimal and conceptual tendencies of international art from the 1960s and 1970s, and the Socialist architecture found in Eastern European states.
With ‘Tower’ at Hauser & Wirth, Sosnowska takes on the International Style. Measuring approximately 110 feet in length, this sprawling work is inspired specifically by the design principles of German-born architect Ludwig Mies van der Rohe, the 20th century’s Ur- Modernist, and makes reference to the iconic International Style trope he elevated to sheer physical poetry: the glass curtain wall. With ‘Tower’, Sosnowska quotes the steel framework underlying the hung glass façade of Mies van der Rohe’s Chicago masterpiece, the Lake Shore Drive Apartments, abstracting, disfiguring and bending that framework into a fallen monument. Unmoored from its rational geometry, ‘Tower’ stretches and curves across the gallery’s vast exhibition space. Through Sosnowska’s re-imagining, a coolly elegant, machined, and perfectly readable structure is transformed into something wholly opposite.
Completed in 1951, the Lake Shore Drive Apartments are among the most striking examples of the radicalization of Bauhaus ideology. These 26-storey skyscrapers are robust steel-framed structures wrapped in deceptively sumptuous materials – floating mantles of steel and diaphanous glass – in a synthesis of aesthetics and technology. At the time of their completion, Mies van der Rohe’s residential towers were among the most expensive ever built, vivid symbols of the imaginative forces driving American capitalism. The transparency of the International Style expressed a dream of societal openness that, when deployed in such a refined and luxurious manner, translated into an expression of power and prosperity. Meanwhile, Mies van der Rohe’s elegant statement stood in stark juxtaposition to the ways in which the very same architectural style figured in the creation of a new social order in Poland under Soviet rule.
Sosnowska’s artistic process often begins with the creation of small maquettes and drawings, rooted in motifs of existing structural forms. Her work is then reproduced at a 1:1 scale with assistance from fabricators, technicians, and engineers, employing the same materials used in the referenced object. The huge steel framework of ‘Tower’ was first constructed as a whole, later cut into more than fifty parts for viable transport, each piece ‘sculptured’ under Sosnowska’s direction. The making of ‘Tower’ involved cranes, hydraulic presses, and chains in a labor intensive, heavily hand-worked process. Subverting its material’s prefabricated rigidity, ‘Tower’ twists and contorts the modernist grid to create a sort of reclining figure, a lyrical sculptural object that usurps perfect structural engineering. ‘Tower’ is the latest product of Sosnowska’s current exploration of the curtain wall as architectural motif and metaphor. In one recent work, for example, she reconstructed the glass façade of the Bauhaus School in Dessau, Germany, a legendary building designed by Walter Gropius.
A new catalogue will be published in conjunction with the New York presentation of ‘Tower’, featuring photographs by acclaimed Polish architectural photographer Juliusz Sokolowski, documenting Sosnowska’s artistic process from development of her initial ideas through to the intermediate steps of fabrication. Each stage is recorded, capturing the process of creation, manipulation, and change. The images will be complemented by an essay from art historian Andrzej Turowski, Professor at the Université de Bourgogne in Dijon, France.

About the Artist
Monika Sosnowska was born in Poland in 1972. She currently lives and works in Warsaw. This summer Sosnowska held residency at L’Atelier Calder in Saché, France (2014), and many of the models she created there will be the focus of an exhibition at Cahiers d’Art in Paris in fall 2014. Major solo exhibitions for Sosnowska have included ‘Market’, Perez Art Museum, Miami FL (2013); Aspen Art Museum, Aspen CO (2013); ‘Regional Modernities’, Australian Center for Contemporary Art, Melbourne, Australia (2013); The Modern Institute, Glasgow, Scotland (2012); ‘The Staircase/Die Treppe, 2010’, K21 Standehaus, Dusseldorf, Germany (2011); Herzliya Museum of Contemporary Art, Herzliya, Israel (2010); Kunstmuseum Liechtenstein, Vaduz, Lichtenstein (2007); and the Museum of Modern Art, New York NY (2006). In 2007, Sosnowska represented Poland at the 52nd Venice Biennale, where her work garnered critical international attention for the monumental sculpture ’1:1’ (2007).
Sosnowska will have important solo exhibitions in winter 2015 at the Serralves Foundation in Porto, Portugal, and Maison Hermes Ginza in Tokyo. 
Amoy Gardens consists of a 35mm slide projection depicting 34 scenarios in and around the eponymous building in Hong Kong, a large-scale development including apartment blocks above a shopping mall. The complex became an epicentre of the region’s 2003 SARS crisis through a malfunction of its ventilation and plumbing systems, leading to a perpetual circulation of the virus throughout its interior. The timed, looped projection is accompanied by an audio recording of a young citizen of Hong Kong reading extracts from Exact Air, Le Corbusier’s treatise on hermetically sealed architecture (The Radiant City, 1933). Her struggle with and re-invention of the manifesto generates a new contingent space between crisis and proposal, event and narrative. 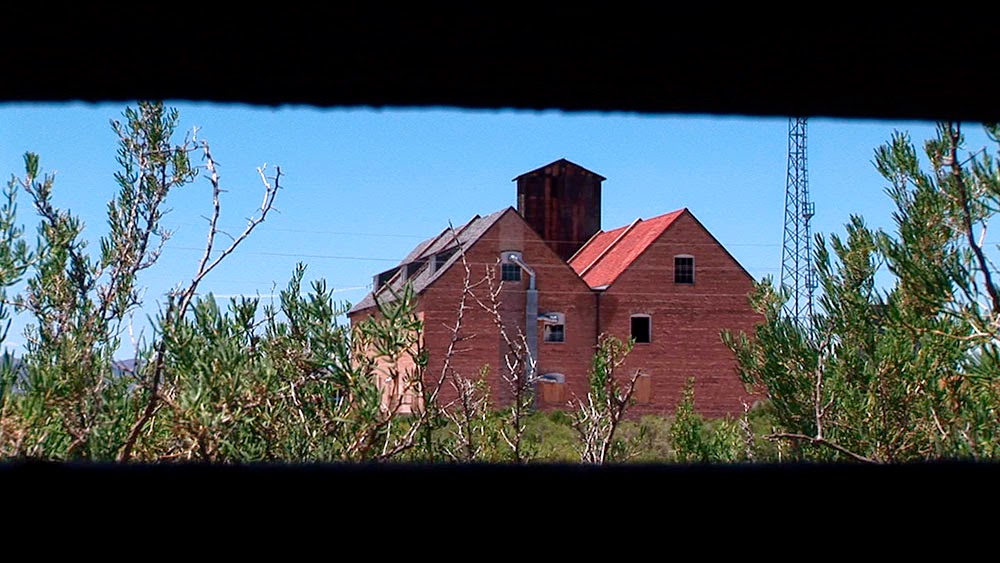 In 1943 the US Army commissioned architect Erich Mendelsohn and RKO Radio Pictures to design and build a replica Berlin housing estate to test incendiary bombs for the Allied war effort. Borrowing its title from the lost proto-expressionist film The House without a Door (Dir. Stellan Rye, 1914), the work approaches the surviving structure through a series of documentary and constructed set pieces. These re-enact imagined screen tests or outtakes, tracing an oblique trajectory from 1920s German expressionist films such as Fritz Lang’s Dr. Mabuse (1922) and F.W. Murnau’s Faust (1926) via the film noir of 1940s émigré Hollywood to a contemporary housing development in a place called ‘Faust’ near the Utah test site. The film features a commissioned soundtrack by Marcus Fjellström reflecting the anachronistic timeline of the film. 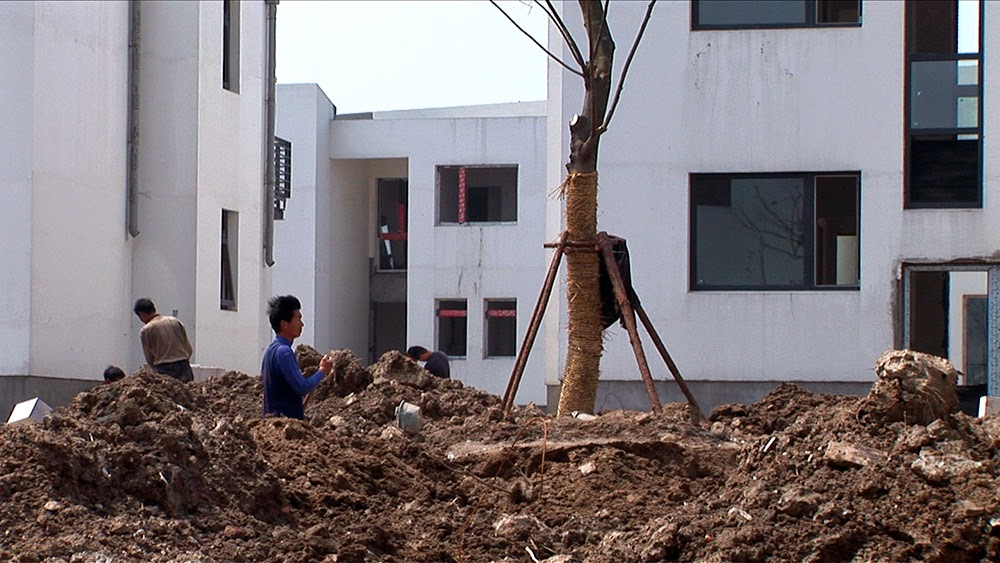 
Chronicling part of a New Town development in China designed by Albert Speer Jr., Weimar Villa (Unreconstructed) ponders the 'ruin value' of white concrete housing shells set amidst mounds of dug-up earth that make up the new Bauhaus-themed gated community of 'Weimar Villa'. Inhabiting a perpetual moment in the cycle of construction and excavation, the video leaves the development to drift between an incomplete destination and an uncertain origin. 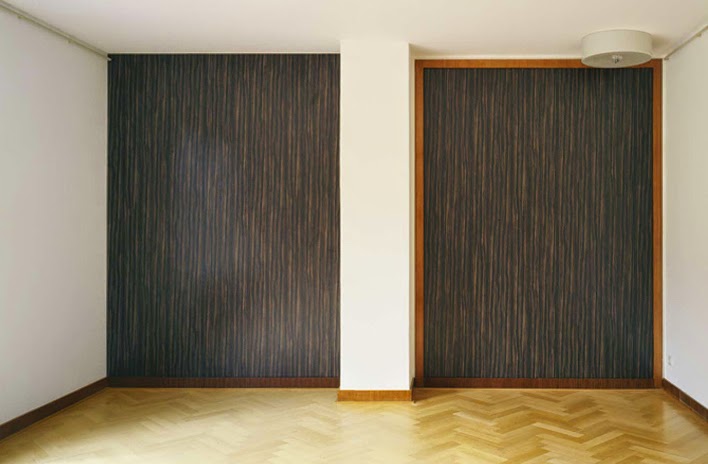 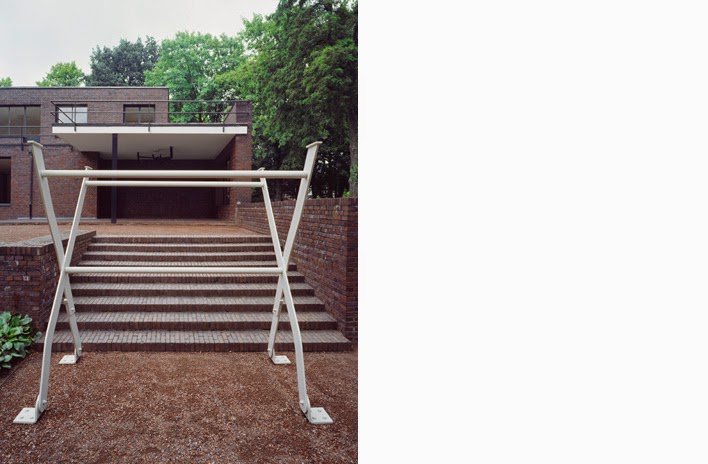 Posted by Fabrizio Gallanti at 20:37 No comments: 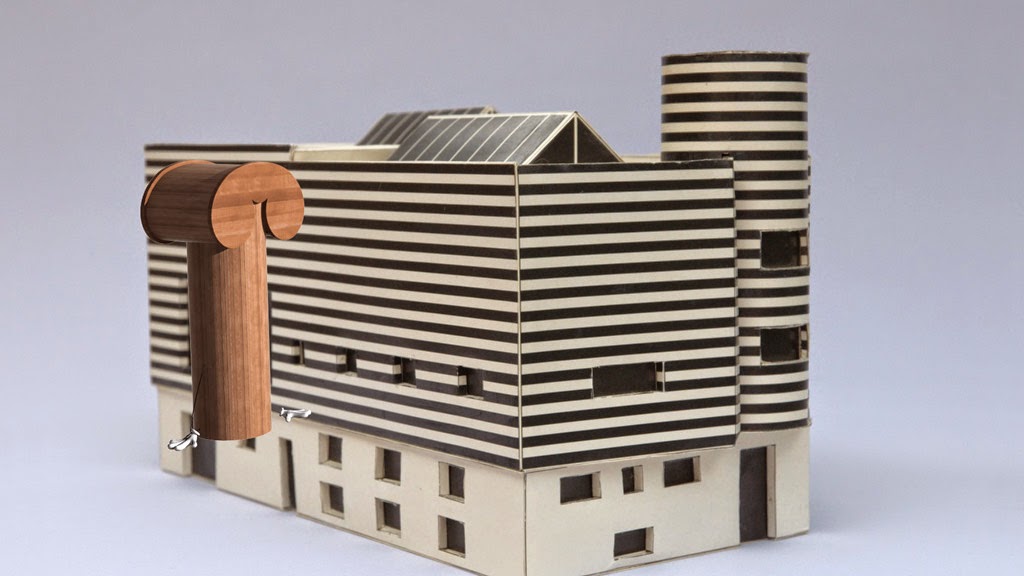 Posted by Fabrizio Gallanti at 20:31 No comments: