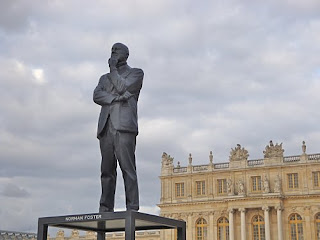 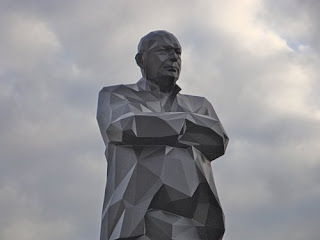 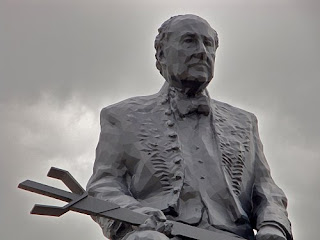 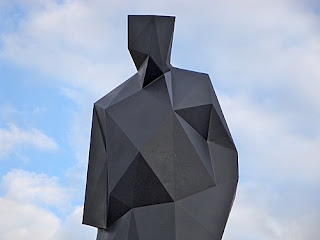 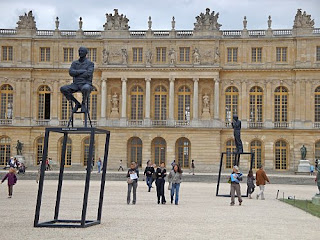 Posted by Fabrizio Gallanti at 00:05 No comments: 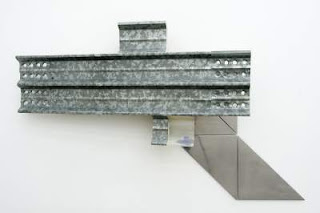 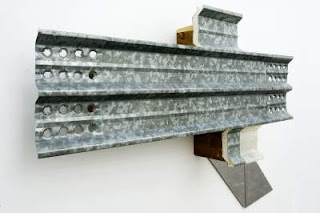 Killed in Action (CSH #6, Omega, Richard NEUTRA)
2009
51.18 x 82.68 x 14.96 inches
Pièce unique
The Case Study House project n°6, or 'Omega' house (1945) should have been the neighbor of the CSH n°13, or 'Alpha' (cf. infra) and in harmony with it. It shows off an industrial sheet metal roof and exemplifies the typical Richard NEUTRA architectural features visible in the slight slope and in the large excesses. The low cost of the construction and the efficiency of the materials corresponded to the purchasers needs. Covered by white light reflecting gravel and made to prevent the penetration of warmth, this roof ensures a very good isolation to the whole construction. Finally the cruciform plan allows the inclusion of four courtyards, each having a specific function.
Wilfrid ALMENDRA uses the sheet metal roof principal and imagines the various it could have suffered, possible additions or perforations. He also evokes the four courtyards through a geometrical paving made of four polish polished steel plates, which are reminders of both Carl ANDRE' s theories and Frank STELLA's shapes.

The Case Study Houses were experiments in residential architecture, aimed at building modern, efficient, affordable houses; it took place on the US West coast, mainly around Los Angeles, between 1945 and 1966. Sponsored by Arts & Architecture magazine, the program's ambition was to create model houses that could help face the real estate boom caused by the end of World War II and the return of millions of demobilized soldiers, mainly young men about to start a home and family.

The program's announcement stated that each 'house must be capable of duplication and in no sense be an individual "performance"; (...) the houses will be conceived within the spirit of our times, using as far as is practicable, many war-born techniques and materials best suited to the expression of man's life in the modern world.' Major architects of the time were commissioned, including Richard NEUTRA, Charles and Ray EAMES, Pierre KOENIG and Eero SAARINEN. Out of 37 projects (35 detached houses and two apartment buildings), 26 were built (25 houses, amongst which some became icons of architecture, and the first part of a block of apartments) and stand, for those still existing, as part of one of the major architectural programs of the 20th century.

As for the ten projects that were not built, they became the inspiration of Wilfrid ALMENDRA's new series Killed in Action (Case Study Houses), a set of ten works each taking after one of the projects. The series takes its title from the official military expression and suggests that these aborted projects, whose 'raison d'être' and building processes were directly linked to the war, were soldiers of Modernism fallen to the field of honor. Wilfrid ALMENDRA made ten 'wall sculptures', low or high reliefs, which switch architecture from the horizontal to the vertical plan.

Each sculpture draws inspiration from the corresponding project's floor plan for its shape, as well as from the techniques and building materials planned for its construction. Wilfrid ALMENDRA finds here an opportunity to demonstrate his art of assemblage from a wide palette of materials: wood, concrete, metal, stone, glass, metal, plaster, tiles etc. As it is often the case with this artist, who considers the production process to be part of the artwork, these materials tell parallel, often autobiographical stories: a piece of asphalt cut from a road with an industrial lapidary becomes the ground for a house; the pyramid-shaped tops of concrete fence poles from a working class house, pavilions' roofs; and the door of his own family house in Portugal, the on piles platform for these pavilions.

Wilfrid ALMENDRA also plays with the specific architectural details of the various projects, which become as many abstract forms: here a monumental roof is turned into a totem of metal and wired glass; there a staircase or a ramp access, a terrace or a swimming pool, or a monumental indoor / outdoor fireplace are integrated into the compositions. Other elements, having to do with the projects context of conception or with the vision they conveyed, are similarly included into the sculptures. For instance, for one of the projects, all sketches at the time were staging a model family, with the father coming back home in his personal helicopter, tomorrow's common means of transportation – a naively optimistic vision of the future, and a blind faith in technique and progress; in Wilfrid ALMENDRA's sculpture, the helicopter blades themselves merge with the house.

But Wilfrid ALMENDRA also extrapolates on what the projects, if built, would have become, hence questioning the suburban destiny of the Modernist utopia. Indeed, before the historical importance of the whole program was recently acknowledged, many of the Case Study Houses that were built had been long neglected, or had undergone significant transformations, and even sometimes had been deeply denatured to adaptto the needs of their inhabitants. ALMENDRA's sculptures tell us about both the ageing of architecture – and through it about the passing of time –, and its 'customizing', whether it is with thick roughcast or unauthorized building modifications. For instance, in one of the works made out of cast concrete, the prominent reinforcing bars recall at the same time those who appear under the eroding concrete of dilapidated houses and the ones seen in houses built without authorization and never finished – skeletons of concrete with pointing metal bars, familiar silhouettes in Southern Europe.

The works of the series Killed in Action (Case Study Houses), shown here along with preparatory drawings and reproductions of original documents, subtly combine several levels of reading: at first, the display of a remarkably abstract aesthetic quality, they also offer a deep reflection on Modern architecture and its becoming, while investigating with empathy the way people adapt their habitat and to their habitat. 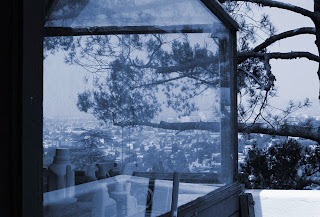