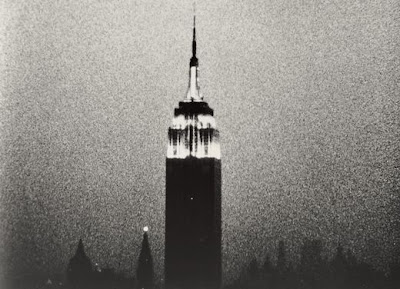 The explanatory text below is taken from the MoMA web site.

Empire consists of a single stationary shot of the Empire State Building filmed from 8:06 p.m. to 2:42 a.m., July 25–26, 1964. The eight-hour, five-minute film, which is typically shown in a theater, lacks a traditional narrative or characters. The passage from daylight to darkness becomes the film’s narrative, while the protagonist is the iconic building that was (and is again) the tallest in New York City. Warhol lengthened Empire's running time by projecting the film at a speed of sixteen frames per second, slower than its shooting speed of twenty-four frames per second, thus making the progression to darkness almost imperceptible. Non-events such as a blinking light at the top of a neighboring building mark the passage of time. According to Warhol, the point of this film—perhaps his most famous and influential cinematic work—is to "see time go by."
Posted by Fabrizio Gallanti at 10:25