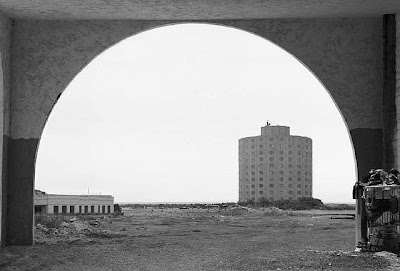 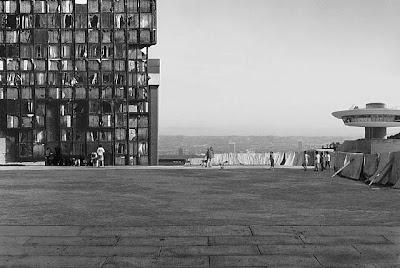 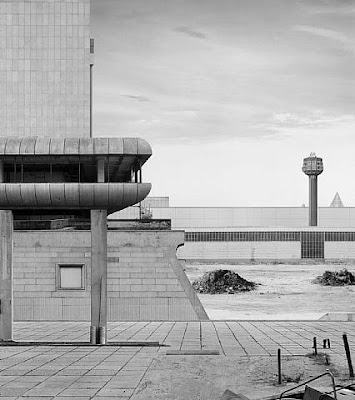 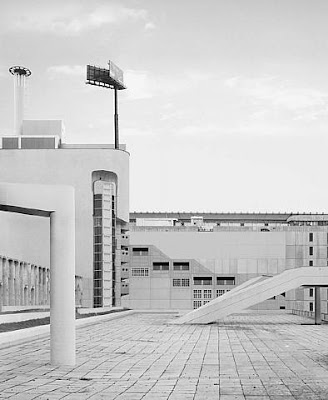 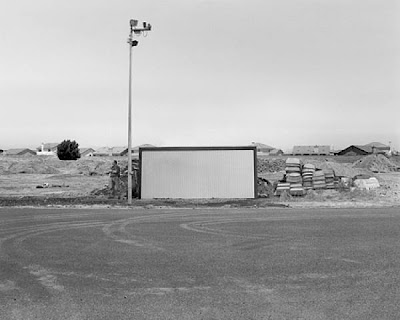 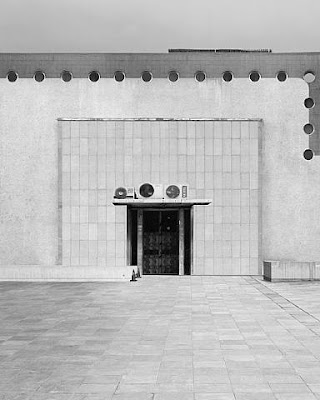 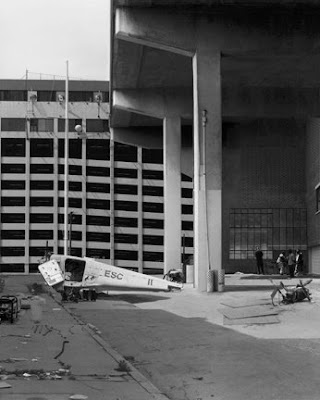 They could be a view into the future where modernistic architecture is a wrecked background with some extant [urban elements]. I wanted to create images which seem familiar to what we know from media, but at the same time it is impossible to recognize the place/site/country or time. – Beate Gütschow, 2005

Beate Gütschow’s panoramic landscapes are digital assemblages of details from the artist’s archive of images of trees, fields, knolls, clouds, people, and shadows. The interface between separate elements is invisible and seamless, however, the colors are eerily saturated and her use of light and shadow often contradictory. Consciously drawing on the history of landscape painting to create her tableaux, Gütschow’s photographs resemble the pastoral scenes painted by artists such as Claude Lorrain, John Constable, and Nicolas Poussin.

In an overlapping series, Gütschow continues to work by montaging multiple image files but the color landscapes have given way to a series of black and white urban settings. Mixing the architecture of many places, she brings together pictures from books and archives, as well as her own photographs from across Europe, Japan, and the United States (Los Angeles in particular). The human figures Gütschow includes in these works are either homeless people or tourists, as placeless as the constructed spaces they occupy. Where the lush pastorals of her earlier work reference idyllic painting, the new series employs view points and subject matter more suited to black-and-white documentary photography, rendering these post-apocalyptic scenes all the more stark and yet all the more familiar.

Gütschow studied at the School of Fine Arts, Hamburg and at the School of Fine Arts, Oslo, Norway. She has participated in one-person and group exhibitions at venues in Germany including Stadtische Galerie, Nordhorn; Produzentengalerie, Hamburg; Kunsthistotisches Institut, Bonn; and Bundeskunsthalle Bonn. Her work is in numerous collections such as the San Francisco Museum of Modern Art; Museum of Modern Art, New York; and the Los Angeles County Museum of Art. She has been the recipient of numerous awards such as a Pixel Award, an Otto-Dix-Prize of New Media, and a Villa Aurora fellowship in Los Angeles. She lives and works in Berlin.

Posted by Fabrizio Gallanti at 20:03