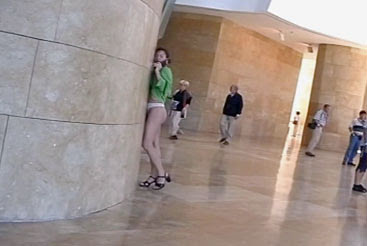 Passing for a journalist for an international biennale, giving a lecture-cum-striptease caricaturing the obsequious collector-artist relationship to patrons, or, disguised as a museum docent, take the public of a museum off on a subversive tour, Andrea Fraser is constantly challenging the position of the artist within the institutional, economic and marketing field of art. Beyond their direct inscription in this specific reality, these reactive mini-scenarios, which she plays herself, nevertheless inject a structural critique into the wider political and social issues. In the short video-performance Little Frank and His Carp (2001), filmed with a hidden camera, the artist plays a visitor to the Guggenheim Bilbao, reacting naively and emotionally to the refined celebratory injunctions of the suave voice of an audio-guide praising the merits of Franck Gehry’s architecture. This is one way of indicating the institutional art space as a consumer venue, but also as a power place seeking to create and guide our emotions towards the utmost vulgarity. Exaggeratedly subjected to a cultural order of things (fetischization of the container rather than the content, the display case more than the object, the museum over the works) which ultimately controls both bodies and imaginations, the artist goes as far as rubbing up erotically against one of the pillars of the building. These unverifiable physical symptoms are due to an invisible parasitic contamination by propagandist rhetoric associating contemporary architecture with a sacred kind of fascination; (sex) tourism in Art-land. Working, as so often, on the professional language and rhetoric of her own circle, using this simple gesture, Fraser denounces through her deeds a direct transposition of marketing and advertising semantics to the art sector, a priori the space of intelligence and knowledge supposedly escaping from the coarse formalism of the market. Here, as in most of her other work, Fraser’s strength and effectiveness lie in using only unmanipulated real speech, with an injunctive logic taken to absurd lengths; the institutional readymade. Resolutely and simply engaged, with feigned ingenuity and enlightening idiocy, this in-situationist intervention questions that fundamental political opposition between celebration and critique (as discussed, for example, by the philosopher Luc Boltanski), now disputed by a consensual postmodernity, more and more readily confusing art and culture.

Posted by Fabrizio Gallanti at 11:00