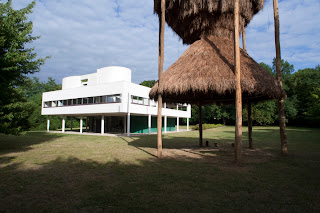 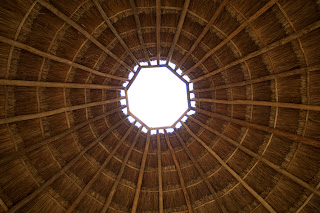 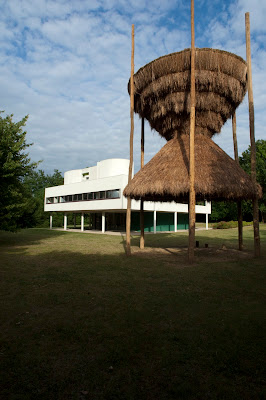 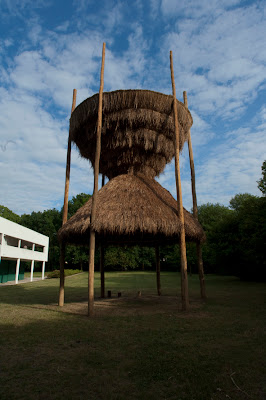 SITIO is a site-specific art project produced for the Villa Savoye in Poissy, France. SITIO furthers the thesis developed by Adolf Max Vogt in his book Le Corbusier, The Noble Savage (2003), where Vogt traces back the invention of pilotis to childhood memories permeated by imagination and fantasy, rather than the high rationale argued by Le Corbusier.  It will employ the same site: the iconic modern building and works created by the artist Santiago Borja, which depart from traditional artisanal techniques of certain Mayan communities in southern Mexico. As part of an anachronic montage, three main pieces will be presented: Destinerrance, which will superimpose two palapas installed in the park; Tapis (rugs), which is conceived for the floors of the Villa's living spaces; and Cosmogonie Suspendue, a weaved ceiling meant to represent the Mayan cosmos, produced for the building's terrace.

Born in Mexico City in 1970, Santiago Borja has a bachelor's of science in architecture from Universidad Iberoamericana in Mexico City, and a master's degree in the theory and practice of contemporary art and new media from the Université Paris 8, France. He has completed several training programs at Central Saint Martins in London and at Centro Nacional de las Artes in Mexico City, and his work is built on the intersection between art and architecture. Among other awards, he has been granted a SNCA-FONCA fellowship, and has received production grants from the Fundación Marcelino Botín and Fundación/Colección JUMEX. Recent projects include Fort Da / Sampler at the Neutra VDL-Research House in Los Angeles; In the Shadow of the Sun at the Irish Museum of Modern Art; Divan at the Freud Museum in London; Décalage at the Museo Experimental El Eco in Mexico City; and Halo at the Pavilion Le Corbusier, Foundation Suisse, CIUP in Paris. Forthcoming projects include Sitio at the Villa Savoye in Poissy and Chromatic Circus at Laxart in Los Angeles.

Posted by Fabrizio Gallanti at 20:10