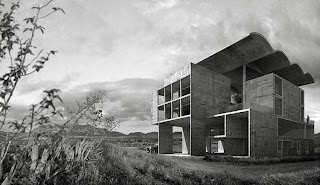 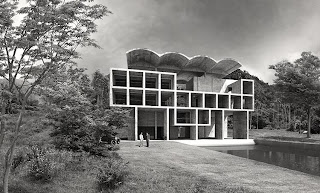 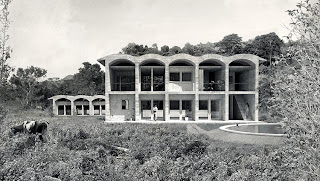 http://www.dionisiogonzalez.es/2013_Lecorbusier.html
30/05/2013 to 13/07/2013
On 30 May Dionisio González will open his first exhibition at Ivorypress, entitled Le Corbusier: The Last Project. In this show, the renowned photographer reflects on utopia, survival and destruction through twenty unrealised projects by the architect Le Corbusier.
‘This exhibition intends to show a work of restitution of omitted vestiges’, explains González. It is therefore an archival task ‘based on processing the object so that it does not become corrupted by oblivion and may be interpreted through its scale and dimension’. The artist has selected buildings that were never erected, such as the Governor’s Palace, in Chandigarh, India; Villa Paul Prado in Buenos Aires, Argentina and the Museum of Unlimited Growth, in Algeria, to restitute them and, at the same time, to destruct them.
The photographer makes the unrealised projects of the master of modern architecture explode, following the idea of philosopher Heidegger that ‘every unbuilt project is a ruin’. The non-execution becomes here ‘a silent and silenced destruction, an explosion which, in this case, implodes’.
With this series, which will be open at Ivorypress until 13 July, the artist approaches the concept of space, ‘a nowhere-place that takes us to a state of utopia which, in itself, is characterised as being nowhere, no place’, González notes.
The show also includes various works from the series Dauphin Island, recently created by the artist and inspired by the island of the same name, in the state of Alabama (USA). ‘My interest in Dauphin Island comes from the study of aquatic architecture and palafittes that originated in the Neolithic Era’, explains González. An island in the Gulf of Mexico that has suffered numerous natural catastrophes and for which the artist has imagined ‘innovative projects that give shape to new habitable structures in the vacuums in the perception of spaces that had previously been devastated’.
​Dionisio González (Gijón, 1965) is senior lecturer at the Faculty of Fine Arts of the Universidad de Sevilla. Throughout his artistic career he has received numerous awards such as the Premio Pilar Juncosa y Sotheby’s from the Fundació Pilar y Joan Miró or the European Photography Arendt Award in 2013. His work has been exhibited in different institutions and museums such as the Museum of Contemporary Photography in Chicago, the Museo Nacional Centro de Arte Reina Sofía de Madrid (MNCARS), the Museu de Arte de São Paulo or the Toronto Museum of Contemporary Canadian Art. His work is represented in prominent collections such as the ING Art Collection in Amsterdam, the Centre National d'Art et de Culture Georges-Pompidou in Paris or the Margulies Collection at The Warehouse, in Miami.