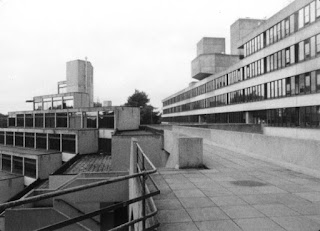 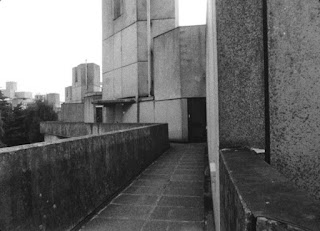 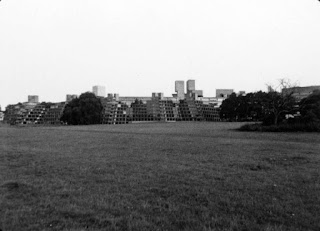 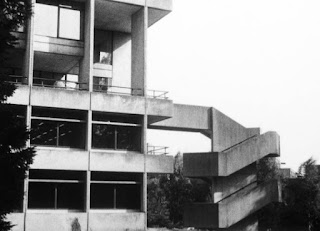 Beton, 2010
two 16mm films and framed paper collages
During the early 1960’s a number of new universities were founded in England. Each of them set out to subject the traditional concepts of teaching and organisation – of the educational institution as a whole – to a severe amount of reformation and experiment. It was a shared believe  at the time that the new ideas and programmes had to be embodied in an entirely new kind of campus architecture which should bring forth not only academically mature, but also socially better adjusted citizens and create a new sense of community.

Andreas Bunte’s b/w 16mm film „New University“, 2010, documents a key example of this type of Postwar University Architecture, the University of East Anglia, designed by Denys Lasdun. A series of static shots exposes empty walkways, staircases, lecture theatres, halls of residence, etc. The campus seems completely deserted, an impression that is increased by the aged concrete which is omnipresent in every part of the site. Bunte left his footage to be a mostly uncut document of his exploration of the campus.

The second 16mm film, „Normbewegungen“, 2010, stages a selection of simple body movements in front of a measuring grid as used in photogrammetry. The ususal purpose of this set-up is to measure the exact dimensions of space required for the execution of a particular movement. Here, a chart of movement measurements found in a publication on norms and regulations for university construction served Bunte as a storyboard for the postures in his film. The crude choreography of banal activities recalls ideas of staging the movements of everyday life as in Postmodern Dance.

In the collages the artist uses pages from architecture magazines and publications on construction engineering. Bold prints of text fragments, invented diagram drawings and simple colour fields made from filter foil are added to them. The paper works are presented in frames alluding to standardised clip frames one might find in students’ homes and function like externalised intertitles commenting on the film.


Posted by Fabrizio Gallanti at 17:10