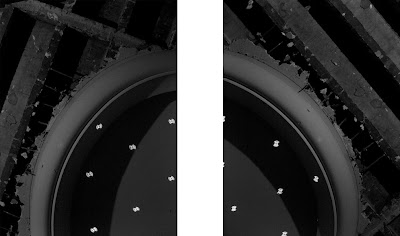 DAWN was filmed in the abandoned basement floor of the Palais de Tokyo in Paris. Originally designed by Dondel, Aubert, Viard and Dastugue, the Palais was completed for the International Exhibition of 1937. Though the palace's 30s classicism exterior remained intact, the interior has undergone a succession of alterations. This had advanced to a point at which the building had been made structurally unsafe, and the interior come to resemble a ruin. In 2001 the Palais got partly reconstructed: the architects Lacaton & Vassal generated 8000 square metres for a contemporary art gallery space, a bookshop and a restaurant.
The video shows around 60 people lying motionless on sleeping bags in the still unrenovated basement floor of the Palais de Tokyo while a disco ball is slowly rotating.
Posted by Fabrizio Gallanti at 16:10