Allora & Calzadilla "How to Appear Invisible" 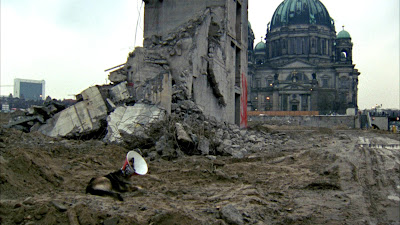 Allora & Calzadilla, How to Appear Invisible, 16mm film on HD, 2008.
Filmed in Berlin on the site of the Schlossplatz at the close of 2008, it documents the last remains of the Palast der Republik being torn down. Bearing witness to this event is a German Shepherd dog wearing a makeshift cone collar fashioned from the trademark container of one of the largest American fast food franchises: Kentucky Fried Chicken. The camera follows the dog roaming through the barren no man's land of the palace ruins as if it was searching for the last remains of an utopia that has vanished.
Posted by Fabrizio Gallanti at 17:55