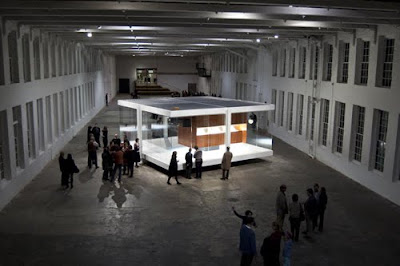 Iñigo Manglano-Ovalle's project Gravity Is a Force to be Reckoned With, is based upon Mies van der Rohe's uncompleted project, the 50x50 House (1951), a square structure open to view on all four sides through glass walls. In Manglano-Ovalle's work, the house will be constructed at approximately half scale and inverted, the ceiling of the original becoming the sculpture's floor, the floor becoming the ceiling, and all interior elements such as Mies-designed furniture and partition walls installed upside down.
Within the sterile, modernist space, a small narrative is evident. Miraculously suspended from above, two empty chairs flank a café table, on which apparently had rested a coffee cup and saucer, which has fallen from the table to the (actual) floor of the sculpture. This cup is shattered and has spilled its contents. Above the broken cup, a cell phone sits precariously on the edge of the café table. Its screen displays a relentless series of video messages that go unanswered by the anonymous and absent occupant of the glass house. As the unrequited callers grow increasing frustrated we are left to piece a story line with only the (anti)gravitational consequence of a sudden occurrence.
This singular mysterious tableau provides a touchstone linking the glass house to what is widely regarded as the first science fiction novel; Yevgeny Zamyatin's We (1921). Set in a futuristic world where individual freedom does not exist and all inhabitants live and work in transparent buildings, the novel tells the story of a state-employed engineer who falls in love with a terrorist and ultimately finds himself in a political and emotional state of desperation culminating in his futile attempt to destroy power and banging his head on glass walls. This narrative relates to yet another unfinished project of Modernism, Sergei Eisenstein's film The Glass House (1930), said to have been inspired by the Zamyatin novel. Eisenstein, who was looking at Mies' drawings for glass skyscrapers in Berlin at the time, intended the film to be his first Hollywood studio production, but his aim to shape the film as a cultural satire of America, ultimately prevented its production.
By conflating these histories Manglano-Ovalle acts as an alchemist, transforming references from literature, film and architecture into a new artistic hybrid. In a sense, Gravity Is a Force to Be Reckoned With manifests itself as much as an event, and a place of artistic action, as it does a traditional exhibition, turning upside down, literally, figuratively, and elegantly inverting separate utopian and dystopian gestures in order to precariously suspend itself in balance between the two.
In conjunction with Gravity Is a Force to be Reckoned Withh will be Manglano-Ovalle's 2006 film Always After (The Glass House) (2006). Functioning as a prelude to his new work at MASS MoCA, the film is about the end of utopian transparency. While Always After documented an actual event, it was neither choreographed nor orchestrated. The action is minimal and seemingly simple. Inside a building, massive windows have been broken, and someone is slowly sweeping up the shattered remains. From a floor level perspective, we see the legs of an anonymous audience/public and hear the sound of broom-swept glass. The location, action, and incongruous audience reaction are unexplained. What is clear is that we have arrived late, always late, always after. The film was created at Crown Hall, Mies van der Rohe's 1950 School of Architecture building on the Illinois Institute of Technology campus in Chicago. In conjunction with Gravity is a Force to be Reckoned With neighboring Williams College Museum of Art presents Juggernaut, a new video work by Manglano-Ovalle. Juggernaut, was filmed in El Vizcaino Biosphere Reserve in Baja Sur, Mexico using super 16mm film, which was then transferred to HD video. El Vizcaino Biosphere Reserve is the largest protected area in Mexico, and is best known as the site of the mating ground for the endangered grey whale. However, instead of filming the endangered whales, Manglano-Ovalle chose to track the seemingly enormous salt mining vehicles and the expansive horizon of the landscape. A “juggernaut” is defined as any large, overpowering, destructive force or object, which Manglano-Ovalle presents to the viewers as these salt mining vehicles as they consume the pristine environment.
Major support for this exhibition is provided by The Andy Warhol Foundation for the Visual Arts and the Krichman Family Fund of the Jewish Community Foundation, with additional support from Phyllis B. Lambert, the National Endowment for the Arts and the Massachusetts Cultural Council. Special thanks to R.K. Miles.
Gravity is a Force to be Reckoned With, 2009 Courtesy the artist and Max Protetch Gallery, NY. Photo by Dylan Lathrop
Posted by Fabrizio Gallanti at 02:22