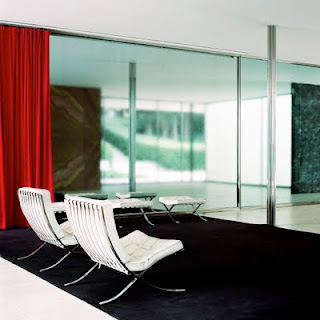 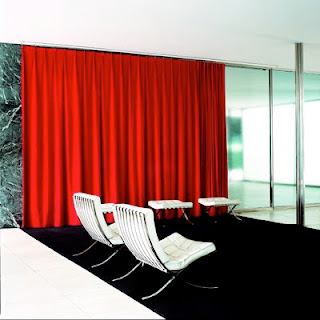 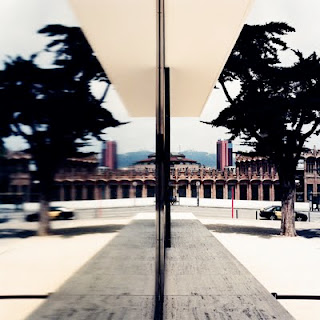 THE WOLD TRAPPED IN THE SELF (MIRRORS FOR WINDOWS)
Stefan Brüggemann at the Mies van der Rohe Pavilion,
Curators: Laurent Fiévet and Silvia Guerra.
May 25 - 29, 2011

The World is a prisoner of its own making as if it has been abruptly locked behind a partition of mirrors.

Artist Stefan Brüggemann at Mies van der Rohe Pavilion follows the maxims Less is more and Gott steckt im Detail (God is in the detail). In order to extol the virtues of the architecture, he has chosen an approach as minimalist as it is radical: replacing the three windows of the principle facade with reflective surfaces. With this choice, the artist revisits the relationship between darkness and transparency in architecture by simultaneously shattering the structure of the façade and rendering it more concrete. The artist accomplishes this separation by blocking light inside the building and rejecting the outdoor light. He enacts a new spatial experiment that turns upside down the free circulation and the aesthetic and philosophical principles at the heart of this architecture. By inviting him to explore the recesses of his mind and question what informs his vision of the world (and therefore recreating his gaze and allowing us to better enter his artistic universe), Stefan Brüggemann includes everything, including the visitor, in his view of his world. This takes physical shape with the projection of his image on the pavilion’s facade through the simple use of reflection, which he in turn violently rejects by blocking his own gaze. We can see this as a way to distinguish the uniqueness of his approach and to use humor to underline his ability to turn something inside out. Just as the visitor finds himself confronted with the projected personification of Morning (as imagined by Georg Kolbe) who suddenly stretches out in front of the fountain’s liquid surface, he is also confronted by himself, face to face with his critical analysis of this artistic creation, whether it be iconoclast or respectful: this location helps the visitor come to terms with his own train of thought and to articulate his concerns. Deeply ambivalent, Stefan Brüggemann’s approach to this intervention brings us back to the image of the mirror which the artist, at times, so enjoys hanging the backwards: the perception generated by his intervention swallows everything up and risks being stifling, much like a posited claim that is still susceptible to doubt and wonder. It resembles a mirror reflecting light, which can both blind and dazzle the eyes.
text by Laurent Fiévet

*****
THE WORLD TRAPPED IN THE SELF
(MIRRORS FOR WINDOWS)

When the World looks in the mirror does it see perfection?

It may not be blind to its perfection, but perfection is boring.

The World’s perfection is its final delusion: man has designed another world richer and more complete than this world and this new one, like the first, is already burning up under the sun.

The Sun’s reflection in the mirror causes it to go up in flames.

Through Stefan Brüggemann’s simple material alterations to Barcelona’s Mies van der Rohe Pavilion, our gaze is held, captivated, by its own image – like a metaphor for this contemporary world.

Duality is a theme in the Pavilion: the marble veining and travertine grain repeat. Stefan Brüggemann’s intervention transforms the transparencies into mirrors through a slight of the hand that allows the spectator to see multiples of himself.

Since its renovation in 1986, art and architecture come together in this timeless work by Mies van der Rohe. Stefan Brüggemann’s ephemeral intervention terminates this dream of eternal life.

The sociologist Bruno Latour deemed that we were never modern, but Brüggemann pushes us to be hypermodern. We must march to the rhythm of our time.