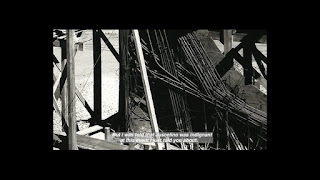 Free Form
video installation
7’14’’
2013
In 1959 Brazil´s capital city, Brasília, was being constructed, designed to be the symbol of modernization and development of the country. Despite its utopian horizons, a massacre happened during the construction of the city, in which the State police killed more than 100 workers after a strike. The video is composed by interviews made with Lucio Costa (the city’s urban planner) and Oscar Niemeyer (the city’s architect), in which both denied the acknowledgement of the massacre, and photos from the construction site, commission by the State, made by Marcel Gautherot. The video reflects on the conflict between institutionalized historical discourses and counter narratives, questioning (infra)structures of power such as History itself, architecture and aesthetic.
MOMA - NY Collection