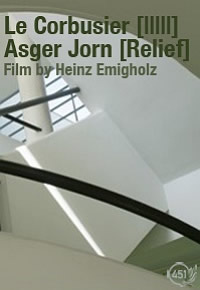 Le Corbusier [IIIII] Asger Jorn [Relief] contrasts the Villa Savoye, built by Le Corbusier in 1931, and Asger Jorn’s Grand Relief, which the Danish painter and sculptor produced in 1959 for the Århus Statsgymnasium. The film makes connections between what, according to the ideological stipulations of their creators, does not belong together.

“The film came about because I was intrigued by the premise of comparing two buildings that at first seem to have nothing to do with one another. A dialogue between thoroughly stylized clarity and declared wildness, both with ideologically trimmings. It was only by working on the film that I learned to appreciate the two works that had once left me indifferent: the delight of their creators in the productively implemented statement.”
Heinz Emigholz
Posted by Fabrizio Gallanti at 22:04