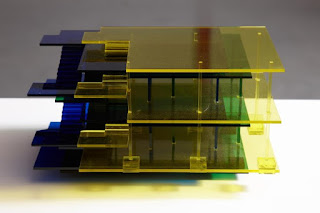 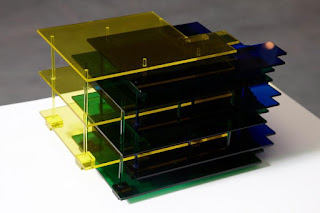 Dom-Ino Colour Separation is one of a series of sculptures by James Angus taking the form of an architectural model. It plays with the modernist architect Le Corbusier’s Maison Dom-Ino, a 1915 prototype for cheap, modular housing that could be constructed in a row, like dominoes. Angus has re-modelled this utopian vision of housing in planes of coloured Plexiglass that overhang each other, unlike the aligned edges of the house’s original design. Angus also introduces a colour separation between the misaligned levels, creating an effect akin to a newsprint error when the three colours separate and the image slips out of register. Through such spatial and chromatic disruptions, Angus invites viewers to see the world about them in new and imaginative ways.
Angus explores the tensions between the modelled idea and the built form and between the ‘colour-separated’ image and the object in this sculpture. His practice is one that questions traditional notions and forms of sculpture by playing with surface, scale and volume. His work ranges from the modest to the gigantic, revealing his ongoing interest in materials and processes. Inspired by aspects of design, architecture and nature, Angus often duplicates existing objects and then distorts them in some way: by exposing them to physical forces such as extreme speed, by turning them inside out, or, as we see in Dom-Ino Colour Separation, by a slight slippage which may be commonplace in a newspaper, but which deranges the clean lines and precision of modernist architecture.