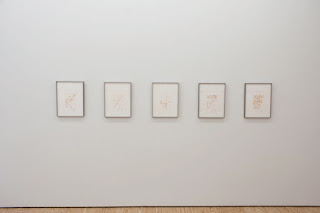 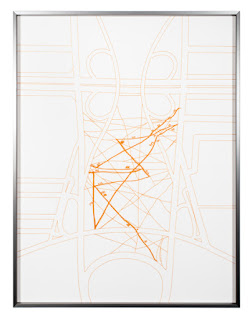 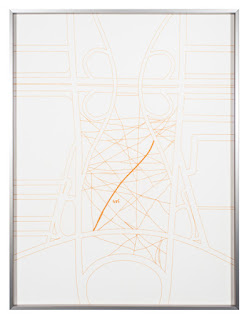 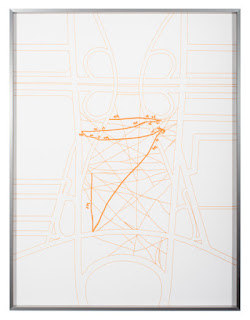 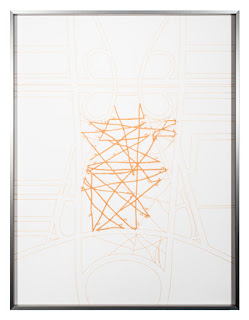 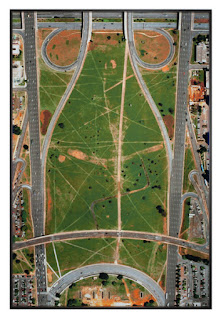 In his 1984 book The Practice of Everyday Life, French philosopher and historian Michel de Certeau describes the relationships between a city and its inhabitants. The city, he writes, is generated and developed by corporations, institutions, and governments. And yet, despite its construction, the city is always in the process of being remade by the people who move through it. Describing the shortcuts
pedestrians take, de Certeau writes, “Their intertwined paths give their shape to spaces. They weave places together… It is true that the operations of walking on can be traced on city maps in such a way as to transcribe their paths (here well-trodden, there very faint) and their trajectories (going this way and not that). But these thick or thin curves only refer, like words, to the absence of what has passed by. Surveys of routes miss what was: the act itself of passing by.”1

In the exhibition Study for a Landscape, Clarissa Tossin takes that action of passing by, the physical inhabitation of a place during a limited span of time, as her subject. The series Brasília by Foot (2009-2013, above) includes a Google Earth satellite image of the city, showing the footpaths made by pedestrians across the iconic green space. Using the image as a kind of map, Tossin retraced certain of these paths. Her notations from this journey indicate the length of each walk, but in a purely subjective measurement: she counts the number of steps she takes across each pre-existing pathway and creates prints which indicate her walks, and are titled by the number of steps she takes: 2,943, 1,505, 485, 1,876, and 8,463. Through this gesture, Tossin draws the body into a dialogue with the practice of mapping—of the measured articulation of a place.

Brasília is an especially rich site for Tossin’s work. Designed from the ground up by architect Oscar Niemeyer and urban planner Lucio Costa, the city was built on a previously empty plateau as a beacon of modernist design for the automobile era. Here in her hometown, Tossin brings that modernist experiment in contact with the imperfections and particularities of the body. What does it mean to walk through a city that was designed with the automobile, rather than the pedestrian, in mind? Tossin prints these images on heavy vellum, using ink specially made from Brasília’s soil. With this material gesture, Tossin makes evident the indexical nature of the work. The maps made with soil places the artist, locating her action within its specific context, and reiterating the organic, happenstance nature of the footpaths carved into the city’s green space.

In Study for a Landscape (Brasília) and Study for a Landscape (Mars) (both 2012), Tossin takes satellite images of the two places and folds them into origami patterns. She folds Brasília into the shape of a car; Mars becomes the backdrop for a folded rocket. The resulting thin, white lines marking the images suggest urban plans poetically aligned with the machinery of human transportation. As in Brasília by Foot, Tossin makes visible the physical gesture of folding: these works similarly index the actions of the body as it bears upon the landscape. Here Tossin suggests that landscape is both a construct of the human imagination and a result of human actions.

Ladrão de Tênis (Sneaker Thief) (2009) indicates the important place of physical presence in Tossin’s work while it also highlights the themes of movement and walking that mark the exhibition as a whole. These plaster casts, made from the interior of used sneakers, capture the materiality of the shoes and their unique differences. The work’s title references a recent upsurge of violent crimes associated with sneaker theft in Brazil, and Tossin links these thefts to the increasing exploitation of desire for consumer goods in the country’s growing capitalist economy. She writes, “The mash-up of brands and bodies exposes the logic of the construction of the self in consumer culture.”

Throughout her body of work, Tossin makes multi-process projects. The objects shown in Study for a Landscape are evidence of an experience, even as they also exist as photographs, as documents, and as installation. They are multi-faceted in the ways they explore the frictions between landscape, the body, and urban space, and they bear complex and rewarding relationships to art historical and architectural precedents, such as land art, urban design, and conceptual practice. These objects are markers of the artist’s presence in a place and of her touch. Even if, as de Certeau argues, a city is built by corporations, governments, and institutions, Tossin’s approach to the landscape of Brasília re-makes and re-envisions that place. She invites the viewer to consider how one’s specific experiences in a place make it new, make it different.