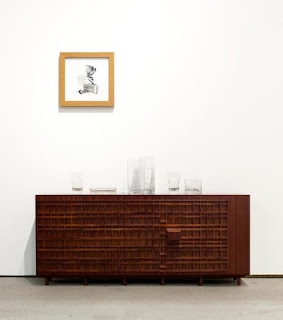 Produced for the exhibition Utopies in Marseille, "L’hypothèse d’une certaine interprétation" refers to the Cité Radieuse, the Unité d’Habitation which Le Corbusier designed in 1945. As both a piece of furniture and a maquette, this piece portrays the building as it was constructed: the vases are arranged in the place of the modules (sports facilities, children’s playground, chimneys…) installed on the roof terrace. The “drawer” executes the primary idea of constructing the building as a bottle rack in which the housing modules are fitted. The work nevertheless goes beyond scaled-down reproduction by, for example, questioning the decorative development of a utopian architectural gesture, with the following question in the background: how, over time, do the aesthetic and the utilitarian, the utopian and the functional fit together? Over and above architectural “criticism”, this piece, in particular through the idea of the drawer, echoes the issue of the secret, which is recurrently developed in the artist’s work. Conversely, this piece can just as well be presented as a piece of furniture asserting its housing function: equipped with receptacles waiting to be filled (the vases), containing “portions of existence” within its drawers and shelves, the work forms an object crystallizing several ways of living in the world, both physically and mentally.
Posted by Fabrizio Gallanti at 19:54