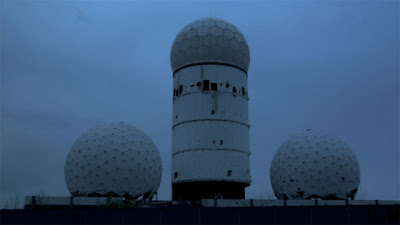 Answer Me (2008) was shot in the abandoned Buckminster Fuller dome of an eavesdropping station built in Berlin, in the mid 50s as part of the global Echelon intelligence-gathering network of NSA for long-range surveillance during the cold war. It stands atop the Teufelsberg hill made from the rubble of postwar Berlin, under which another building designed by Albert Speer is buried.

Based on a dialogue from a note that Michelangelo Antonioni wrote on the breakdown of a couple, where he wanted "to shoot not their conversation but their silences, their silent words. Silence as a negative dimension of speech," Answer Me becomes, under the exceptional acoustics of the geodesic dome, a loud stillness of silencing decibels. The drama comes under the influence of the building, the architectural maelstrom whirls the narrative.
As a woman tries to end a relationship, her companion refuses to listen and plays the drums fiercely, blocking her voice from reaching him. At times her voice is heard, at times only her lips seen phrasing it, her voice silenced by his drumming. Next to her, the skin of a vacant drum vibrates and responds to the frequencies of the drumming. Amplified by the dome, those frequencies create not only an audible but also a visible echo by causing the drumsticks to bounce.
In the exhibition, a snare drum with a built-in speaker plays to the film's soundtrack that has been remixed in inaudible frequencies, emphasizing this moment of delay and amplification. The drumsticks respond to these frequencies and play to the film. The audible echo in the original context becomes a visual reverberation in the show.
The opening will feature a drum performance responding to the snare drum installation, further echoing the resonations from the film.
The second work on view, Who is afraid of red, yellow and green (2008) features Berlin traffic lights at night inhabited by spiders spinning their webs undisturbed by the interruptions of colour. Anri Sala was born 1974 in Albania and lives in Berlin.