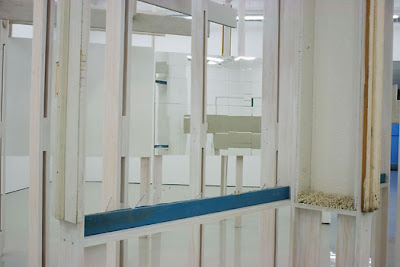 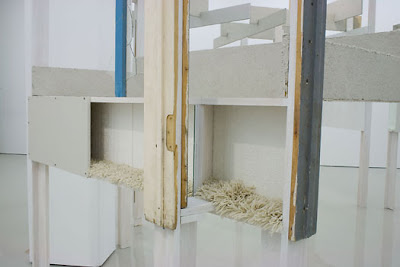 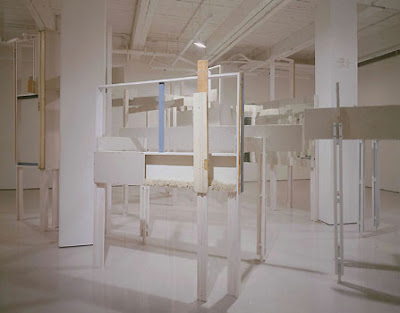 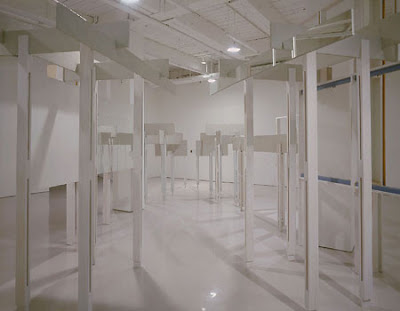 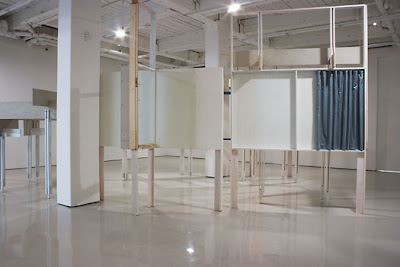 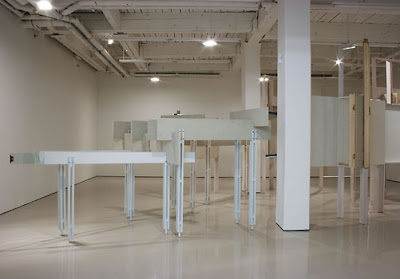 D'Amelio Terras is pleased to present our second solo exhibition with Heather Rowe. She will exhibit On Returning, a single large-scale sculpture positioned between the two main gallery columns. This work continues Rowe’s exploration of architectural fragmentation, structural dysfunction, and material inversion. Countering the more conventional construction-like elements are strategically placed details, culled from a range of design styles and periods.

This installation takes a late modernist house designed by Paul Rudolph in 1972 as its point of departure. The Westport Connecticut dwelling was recently demolished to make way for a new construction. In Rowe’s incarnation of the design, the façade of the house is mirrored and the two resulting structures are inverted and placed at an angle. The outside walls face each other and the interior becomes exposed and unprotected. Remnants of a fictional domestic space (smashed window frame, tiled bathroom mirrors, a patterned curtain) are inserted within the sculpture and elevate it into a more personal and psychological realm. This illusionistic space is meant to be passed around and through allowing viewers to return to the same intersections and question their similarities and/or differences. Here, the architecture, its interior design and style become pronounced in a particular way where they become extensions of irrational attachments and neurosis.

“…on returning to a place which exists only in the mind. Either a place destroyed or a place once inhabited and then left. The mind brings about distorted ideas of the actual space-assigning scale and size in a more psychologically charged way, shaped by events that occurred there.” (from the artist)

Rowe is currently featured in 'Undone' at The Whitney Museum at Altria, New York. In 2007 she was included in Practical F/X, Mary Boone Gallery, New York, and Stubborn Materials, Peter Blum Gallery, New York. Her work has been exhibited at The Contemporary Art Center, Cincinnati; Michael Zink Galerie, Munich; White Columns, New York; and Artists Space, New York. She received her MFA from Columbia University and lives and works in New York City.

The Artist would like to thank Nepal Asatthawasi at the Paul Rudolph
Foundation for her generous help with this project as well as Chris
Mottalini for his photographs of the Micheels House.

via D'Amelio Terras
Posted by Fabrizio Gallanti at 11:53