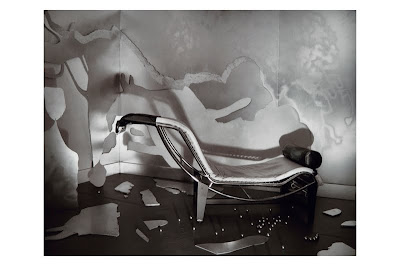 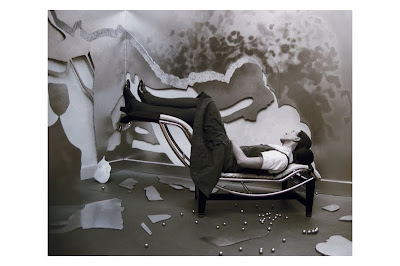 The 1928 Chaise Longue, a design classic, has often been attributed simply to Le Corbusier, but was in fact designed in collaboration with Charlotte Perriand and Pierre Jeanneret. The now iconic photograph that illustrates the piece was not only staged but also modelled by Perriand herself. In this provocative and beautifully realised exhibition, artist Sadie Murdoch uses her own formal language to reshape this historical image. By impersonating Charlotte Perriand and photographing herself in the same pose on the chaise longue, Murdoch asks complex questions about authorship and identity.

This reinterpretation of the classic image has involved Murdoch in a painstaking process of finding props, clothes and black and white stage make-up in order to produce a monochrome image on a colour film. Even the shadows in the original photograph have been re-made, in a move which undermines the rationalist project of modernism.

Sadie Murdoch is an artist who has compellingly pursued her fascination with modernist architecture and design and how it is represented. The often antagonistic but ultimately mutually dependent histories of the female and male designer is a subject which has interested Murdoch for some time and in two recent solo exhibitions in London she has examined the positions of Lilly Reich and Eileen Gray. As well as giving a feminist reading of modernist design, Murdoch offers an incisive commentary on its materials, highlighting their sheen and transparency but also their degradation and vulnerability.

Sadie Murdoch (b.1965) studied at Leeds Metropolitan University (BA and PhD) and at Chelsea (MA), and on the Whitney Museum of American Art Independent Study Program in New York. She has recently shown at domoBaal contemporary art and at the Henry Peacock Gallery in London (2002 and 2005).

via The Henry Moore Institute

Posted by Fabrizio Gallanti at 18:39