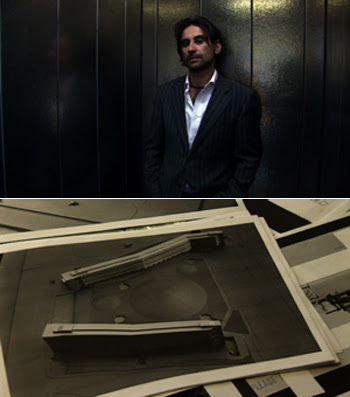 Media Art Bath is delighted to announce the exhibition of a new commission by Gail Pickering, BRUTALIST PREMOLITION featuring both film and performance.

The performance and film works of Gail Pickering are characterized by a layering of performative fictions, constructed and sourced through specific sites and historical or political events. Her recent video works explore ideas of highly authored forms of collaboration. Working with both amateur and professional actors, she devises scenarios or situations in which the discrepancy between individual and ‘role’ is emphasised and questioned.

BRUTALIST PREMOLITION takes as its starting point the snaking concrete housing estate Robin Hood Gardens, designed by Alison and Peter Smithson, a key example of post-war New Brutalist architecture intended as a utopian form of large scale social housing. Pickering works from the interior of the architecture, producing a film from within one of the flats on the estate. The film shows a resident family casting professional actors to play themselves. Embedding familiar faces from British television and film, we see the actors repeating well-rehearsed scenes from their inventory of past roles. As the work progresses, the actors begin to occupy the flat where their theatricality and professionalism is played out alongside the participation of the family.

For its presentation at Arnolfini, Pickering will produce a special performance alongside the film, extending the works interests into the realm of a live event.

For more information and tickets please contact Bridget Crone or Lucy Sames on 01225 442 591, or email: info@mediaartbath.org.uk.

BRUTALIST PREMOLITION has been commissioned by Media Art Bath with support from the Henry Moore Foundation and is also included in a solo exhibition, as part of ‘Nought to Sixty' - 13-20 October 2008, Institute of Contemporary Arts, The Mall, London. www.ica.org.uk

Media Art Bath – championing contemporary art and ideas through the development of bold new work.
Posted by Fabrizio Gallanti at 11:42