Cezary Bodzianowski + Eiffel (among other stuff) 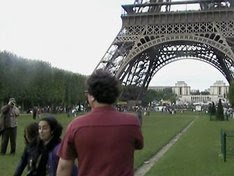 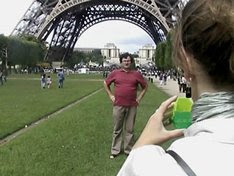 The video recording of the series of four events by Cezary Bodzianowski which took place in Paris in 2004 is entitled simply and deceptively 4 x Paris. The title is borrowed from the blockbuster exhibition that took place at the Zachêta Gallery in Warsaw in the 1980s. The show reinforced the belief in the cultural supremacy of Paris in the twentieth century, still popular in Poland today. The events filmed as parts of the piece include the artist asking tourists by the Eiffel tower to take a picture of himself with a toy camera, the artist asking different passers-by on the bank of River Seine for the hour and accordingly drawing the clock on his forearm, and two other actions devised according to the rules that were as strict as they were enigmatic. Bodzianowski’s work usually has a precise and concise structure. It delves into various daily situations. These realities are diverted from their course by means of sly and sparse changes inscribed by the artist in their routine scripts.
Posted by Fabrizio Gallanti at 16:47