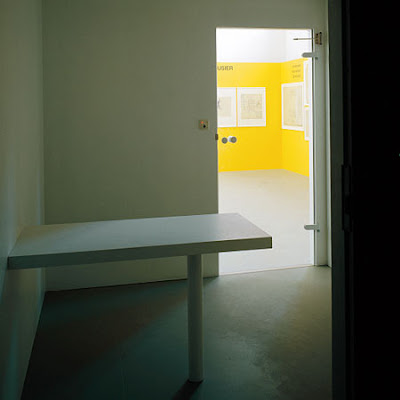 In the Munich Kunstverein, Müller developed a confrontation with late modernism and its utopias: with the Philips Pavilion realization designed by Le Corbusier together with Iannis Xenakis and Edgard Varèse for the 1958 World’s Fair in Brussels, with Veit Harlan’s film, Anders als du und ich (1957), and with Nicolas Schöffer’s book, Die kybernetische Stadt (1969). These three late modernist projects were presented through historical documents, commentaries, and quotations mounted on colored walls, along with Müller’s own treatment of the historical material, and models and reinterpretations of the originals.

The Philips Pavilion, a tent-like construction of hyperbolic paraboloids, was designed exclusively for the performance of the Poème électronique. During each eight-minute presentation, 500 visitors would be channeled through a Gesamtkunstwerk consisting of Varèse’s musical composition, Xenakis’ spatial design, and Le Corbusier’s projection of world history on the interior walls – a multimedia cosmology that began with apes and ended with Le Corbusier’s own work. In the Munich Kunstverein, Müller presented a model of the pavilion along with the “minuscule bureau” from Le Corbusier’s large studio at 35 rue de Sèvres in Paris. This study was a tiny, windowless room constructed according to “Modulor” proportions (226 x 259 x 226 cm). Containing only a table, a chair, a wall painting, and a sculpture mounted on a pedestal, it was intended to accommodate a maximum of four visitors. The confining character of the fully enclosed space was, according to Le Corbusier, supposed to force visitors to be concise and objective. Müller used the measurements of Le Corbusier’s study to create an installation doubling its structure. The dimensions of both spaces were identical to those of the “minuscule bureau,” and since they were constructed as mirror images of each other, the second space could only be entered through the first. The latter contained a built-in table like the original but without chairs. Unlike Le Corbusier’s colored design, this space was pure white, with no wall segments or sculpture. The second space reversed this principle. Completely lined with black carpet, it consisted of a black cube whose dimensions the viewer could not easily assimilate.

To enter the white space of Le Corbusier’s study, visitors had to pass through a light-activated electric barrier, the only means by which the door could be opened and closed. A second, secured glass door blocked the entrance to the black cube. Only when the first door was closed did the second one open, allowing visitors to enter, and then closing again behind them. Triggered by a motion sensor, Varèse’s eight-minute composition Poème électronique would then play in the black box. Here, the monumental presentation of world history originally created for the Philips Pavilion was repeated in a space whose door could only be opened by means of an alarm button. Near this installation, Müller displayed Le Corbusier’s original “Modulor” drawings and sketches on a yellow partition wall along with Varèse’s scores as well as quotations from Le Corbusier on his “bureau minuscule.”

In the same large hall of the Kunstverein, another late modern utopia was presented on a low skin colored partition wall. Here, the notion of reproductive hygiene was the central theme with the vision of the “cybernetic city” of Paris developed by Nicolas Schöffer in 1969. The life span of the city’s inhabitants was completely planned out, from the “value increase in time” to the “Center for Sexual Recreation.” In the Munich exhibition, Müller presented examples from Schöffer’s planning as well as his detailed specifications and graphic models, placing them into relation to Le Corbusier’s synaesthetic pavilion.

In the next room, two enamel panels from Müller’s 1990 exhibition at the Galerie Micheline Szwajcer (see p. 97) were mounted on the wall adjacent to the large exhibition hall on the right. As in the Szwajcer exhibition, the right-hand panel listed the world “metropolises” from Le Corbusier’s plans for Villes radieuses, while the left-hand panel showed the enlarged cover of a tourist brochure from Antwerp with a photograph of the cathedral. Müller continued Le Corbusier’s list of cities horizontally around the walls of the room, handwriting his own exhibition locations in chronological order from 1986 to 1992.

The remaining wall featured a glass vitrine containing other original documents from Le Corbusier that were placed next to a long wooden bench. As a counterpoint to Le Corbusier and Schöffer, Müller also presented one of the prominent oppon­ents of modernism in a cinematic showcase of Veit Harlan’s film, Anders als du und ich. The director had achieved recognition in the Nazi era with anti-Semitic agitation films such as Jud Süss; in 1957, the year of Müller’s birth, he produced a drama combining homophobia and the rejection of artistic abstraction in a single narrative. The film, Anders als du und ich, portrays the conversion of a homosexual abstract artist into a heterosexual representational painter. In Munich, the cinematic showcase presented posters, film stills, and critical reviews of the film. Visitors had to pass through a plastic tube stretched into a tunnel to enter the next room where they were confronted with Müller’s own version, created together with Madeleine Bernstorff — a trailer with a montage of scenes the motion picture rating organization FSK confiscated in the nineteen-fifties. Forgotten Future reconstructed late modernism through a tour of its unrealized utopias; Müller traced the end of these utopias not simply by studying them, but by producing connections between them.
Posted by Fabrizio Gallanti at 17:11