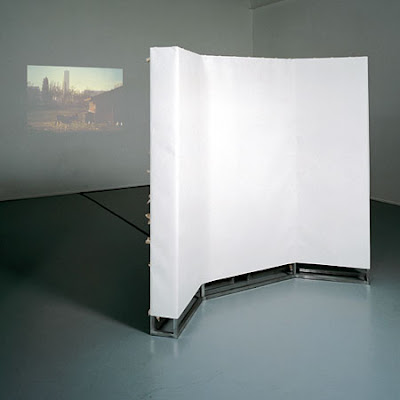 In his first gallery exhibition, Christian Philipp Müller presented a “Promenade dans une Ville Radieuse non réalisée.” The invitation to the exhibition included a quotation from Le Corbusier’s La Ville radieuse: “In place of so many small, scattered skyscrapers, a few large ones will be put up between 42nd Street and 55th Street, in groups. Distance will be overcome. And hours will be saved and usable. In Algiers, a single skyscraper will suffice. In Barcelona, two skyscrapers. In Antwerp, three skyscrapers.” In 1933, Le Corbusier participated in a urbanistic competition for the city of Antwerp. His contribution was the construction of a Ville radieuse. The competition results remained unrealized, but Le Corbusier’s La Ville radieuse was published in 1935 as the principle of standardized urban planning, a “ville verte,” an urbanism using technology to bring nature back into the city.

At Müller’s exhibition at the Galerie Micheline Szwajcer, visitors encountered a street-like arrangement with two enamel panels installed at the beginning. The right panel showed an original impression of the title page of the book with a list of the cities for which Le Corbusier designed Villes radieuses. Here, Antwerp appeared in ninth place. To the left, a photograph showed the central building on which Le Corbusier’s plan was oriented, the cathedral of Antwerp. Above the cathedral was the word “Ant­werpen,” modeled on the cover of the 1990 tourist brochure published by the city of Antwerp. In the exhibition space at the end of the “street” were three objects, each 183 centimeters high (the ideal height of Le Corbusier’s “Modulor”) and 220 centimeters wide. Constructed of iridescent cinema screen tied to steel scaffolds, they served as models of the three unrealized skyscrapers for Antwerp. From these objects, identical slides were projected onto the wall, each showing the site for which the skyscrapers were planned: a scene with grass, a wooden hut, and a donkey in the sunset. In the background, only a banal highrise stood in for Le Corbusier’s skyscraper.

For the exhibition, Müller produced an artist’s book including a silkscreen of Le Corbusier’s plans for Antwerp, sections of the publication La Ville radieuse, photographs of Antwerp culture, and Müller’s rereading of the city, a walk, the Promenade dans une Ville radieuse non réalisée. The loose-leaf notebook described a tour through an unrealized urbanistic design for Antwerp, following Le Corbusier’s plans for the left bank of the Schelde. The artist himself did not conduct tours of the city, but gallery visitors were invited to set out with the artist book—unlike any other travel guide in its form and material for an unknown, culturally impoverished district of Antwerp. At the end, the notebook was signed by both authors: a facsimile showed Le Corbusier’s signature on a letter regarding the republication of La Ville radieuse in 1964, while across from it on the last page Christian Philipp Müller signed the book with the edition number of his “original.” The prototype for the square book, designed in consistent “Modulor” proportions, was the publication for the Poème électronique in the Philips pavilion of the World’s Fair in Brussels in 1958.
Posted by Fabrizio Gallanti at 17:08