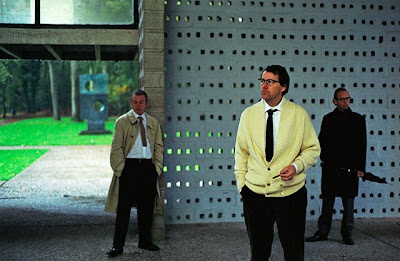 The project 1984 and Beyond (2005) features a discussion between twelve science-fiction writers that originally took place in 1963. Filmed in the Netherlands in the Kröller-Müller Museum at the Sonsbeek Pavilion (Rietveldt, 1965) and in 's-Hertogenbosch at the Provinciehuis (Maaskant, 1959 -1971), 1984 gathers such characters as Arthur C. Clarke and Rod Serling, who occupy these quasi-Brutalist settings to ponder Life on Mars, artificial intelligence, and over-population. A conflation of scientific fact and extraordinary speculation, as Emily Pethick remarks, 1984 and Beyond is by no means a simple reconstruction of a document, but a collection of multiple narratives and parallel histories that lead tangentially outwards, forming connections between three time periods, 1963, 1984, and 2005.
Posted by Fabrizio Gallanti at 17:44