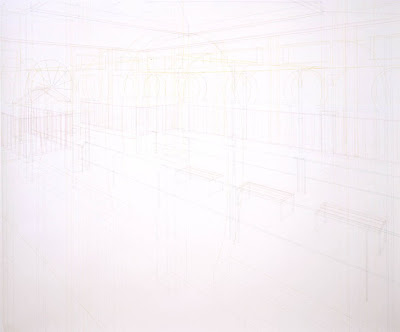 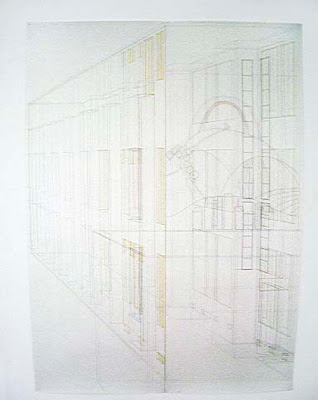 Text taken from the Saatchi gallery.

Silke Schatz’s sculptures and drawings reflect her interest in architecture as both public and private space. A large portion of work in this collection revolves around an investigative description of her home town of Celle, Germany. Borrowing her aesthetics from Neues Bauen architect Otto Haesler, who was working in Celle in the 1930s, these works combine the bold colours and futuristic design of that period, as well as their associations with civic progress and optimism. In pieces such as Mothership, Schatz’s concentric orb is suspended as a mobile, its varying layers suggesting a balanced microcosm or engineering model. Finished on the exterior with the buoyant shades of 20th century idealism, the calculated façade conceals layers of images and text belying its authoritarian construction.

Drawing parallels between the social function of architecture and its impact on the individuals engaged with it, pieces such as Wurzelkind feature structural design as backdrop to Schatz’s own family biography. Her grandfather was an SS officer charged with war crimes; he committed suicide in the 1960s, leaving many questions unanswered. This piece features effigies of her grandparents, posed in front of a mural of Thears Gardenhouse, the officers’ barracks where they lived in 1942. The lamp was taken from this building, no longer in use. Schatz’s installation is both homage and spectacle: a haunting stage play confronting horror, reconciliation, and discomfort of identity.

Schatz’s drawings merge this inbetweeness of imposed structure and intimate negotiation. Based on Haesler’s own sketches, Elephantenhaus and Celle, Siedlung Georgsgarten appear as both architectural blueprint and ephemeral fantasy. Altering the original subjects to reflect her own sense of invention, Schatz’s drawings illustrate concrete space as a malleable construct, both directing and being informed by the viewer’s own memories and experiences
Posted by Fabrizio Gallanti at 19:06