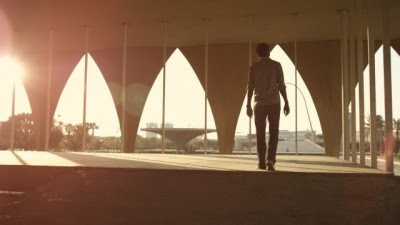 Tripoli emphasises the relationship between urban identities, political history and architectural traces through the preserved relics of our recent past. Tripoli in North Lebanon holds the remains of one of the world's most distinctive and ambitious construction projects, a stranded vision in the form of an international market place designed by the Brazilian architect Oscar Niemeyer in 1966. On the outbreak of the civil war in Lebanon in 1975 all the work on the extensive project ceased, and the buildings were never completed. The site is an unfinished monument of an optimistic time in the Middle East, and a historic fantasy, in contrast to the ‘real’ everyday modernism of Tripoli, which rises like a wall of apartment blocks behind. The film is part architectural documentary and part theatrical drama. Tripoli attempts to leave space in the film for a story of violence and the uncanny.

Posted by Fabrizio Gallanti at 12:45