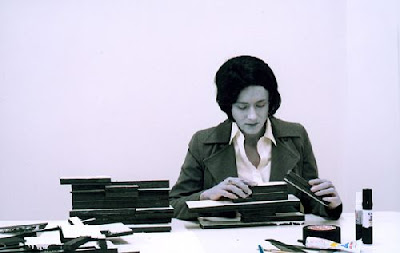 The artist disguises herself as architect Eileen Gray and crashes Philip Johnson's favorite table at the Four Season's restaurant (designed by Johnson in 1959). Murdoch's character proceeds to play with the equivalent of a set of building blocks, transforming Johnson's monolithic guest house designed for his own estate in the early 1950s into the Monument to Karl Liebknecht and Rosa Luxemburg, equally monolithic and designed by Johnson's "master" Mies van der Rohe in 1926.
Posted by Fabrizio Gallanti at 18:51