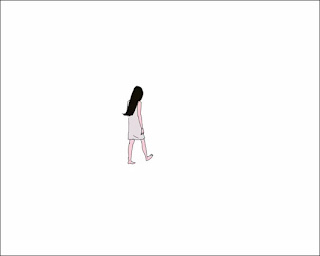 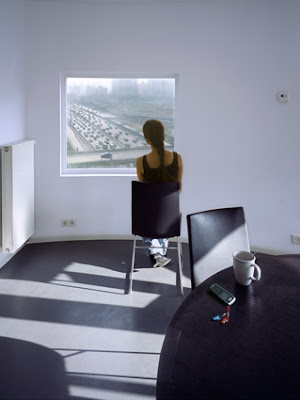 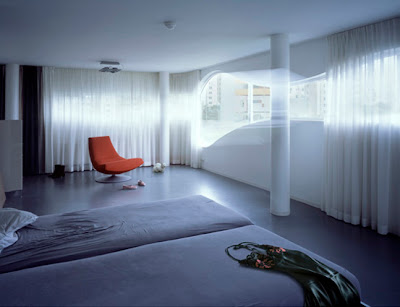 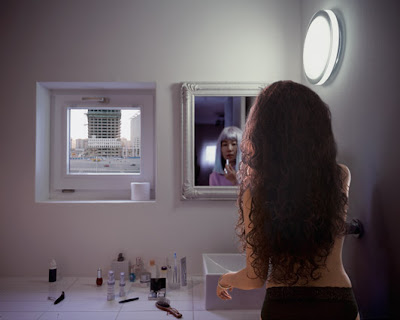 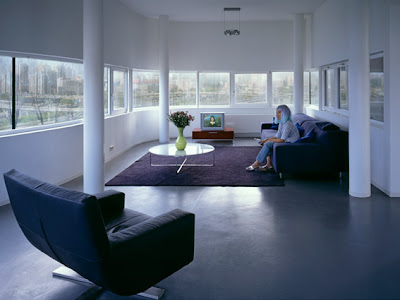 
Looking out the window is a view of a city - a large city, populated by people, buildings, cars and roads. In this scale and from this perspective, distance and time are no longer simple realities of everyday life. People commute from one place to another, passing within centimeters and seconds of each other. We can be so close but at the same time so far away from each other physically and emotionally. This is I picture big cities. As the material quality of life has improved, less intimacy remains; the more a city develops and expands, the further we are alienated from one another. Loneliness becomes a fact, which envelops our everyday life and feelings.


In Feb 2007, I was invited to participate in the Wall House Foundation Residency Program located in Northern Holland on the outskirts of Groninger. Wall House is one of the few actual realized architecture designed by John Hejduk. His name might not be well known, but he is a widely respected and influential architect whose conceptual and theoretical philosophy significantly impacted the field in the 1970s. Until Hejduk’s death in 2000, none of his projects had ever been realized. Wall House was built posthumously in 2001.


The central element in the Wall House is, as the name suggests, an 18 meter-wide and 14 meter-high wall. This wall horizontally cuts the house into two discreet spaces. On one side of the wall there is a three-storey residential space, which includes the living room, the kitchen adjoining dining room and bedroom. On the other side are the more technical spaces, such as the office, stairs, bathroom and toilet, and a corridor which is about 30 meter-long and 2 meter-wide. This long and narrow path vertically runs through the center of the house from the house entrance into the dinning room, which ends at The Wall.

It seems like a long bridge connecting these two spaces from two sides of The Wall.
Wall House’s unconventional floor plan reflects Hejduk’s interest in the tensions between public and private space within a dwelling. In the case of Wall House, the occupant always feels detached from what happens on the other side of the wall and, at the same time, that person will always have the feeling of being a stranger within the interior — essentially creating a sense of isolation on both sides of the wall. Inhabiting Wall House for two weeks on my own, I explored the theoretical concepts behind Hejduk’s work. As my focus shifted away from the architecture, I become inspired by the psychological experience of living in the house and created my own work, “Wall House”.


In “Wall House”, I use Hedjuk’s problematic physical space as a starting point and continue to explore themes of contemporary loneliness and detachment in urban life. I project the idea of emotion and physical displacement through the use of a solitary figure: “I” live alone without a choice and “I” am obligated to accept this loneliness. Confronted with this reality, I am searching for truth and an answer to the question, “how does one live alone?” I intend to raise awareness about living alone, where “you” are your only companion.


The interior spaces in these photographs were shot inside the actual Wall House. I am the subject in every photograph. The exterior cityscapes, seen through the windows, are images from cities in China. I hope to create a contrast between the vacant interior space and the dense city outside. This creates an invisible relationship between people who are linked by proximity but lack true interpersonal connections. Details and symbolic visuals were digitally inserted within the photographs by computer and include details from John Hedjuk’s original Wall House maquette.


This work is presented as an installation with 4 photographs, 1 animation video projection and white plaster walls. The plaster walls are set up as the division of jointed apartments next to each other.

The sizes of the 4 photographs are different. They are hung along the walls separately with different depth and perspective, which suggests the views into the rooms.

The animation video loop projects onto the image of an empty bedroom, which creates an illusionary layer over this emptiness. These two medias merge into each other, create a unique effect between the fact and illusion, which implicates the reversed relationship between the neighbors. The woman from the animation video supposes the owner of the empty bedroom (image 3), who is drawn from my act too.
The photo prints are photographic C-prints, DIASEC (back-mounted on aluminum, face-mounted with Plexi-glas, supported by rectangle braces behind).