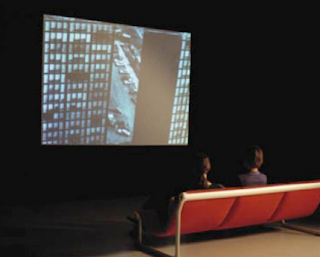 The Film
The film is an investigation of the garden, an attempt to reconcile nature with urbanism. Rönicke’s strange visions include Manhattan skyscrapers, surrounded by dense forest, and rice fields on top of Mies van der Rohe’s Lake Shore Drive Apartments. The visions are as utopians of a restored balance between urbanism and nature. In the film, collage is used as a medium with images from popular culture. Rönicke also criticises modernism’s way of presupposing one particular way of living. In her pieces, Rönicke takes on the role of a kind of a poetic urban planner. By presenting her subjective utopias, she is on one hand revealing a possible future, and on the other, reﬂecting on their utopian character.
Text: Henrikke Nielse
Posted by Fabrizio Gallanti at 10:40