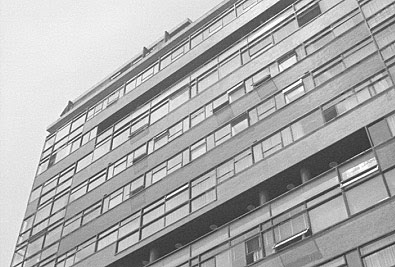 Shown as a digital video projection, Ciudad Moderna is a composite of clips taken from a popular Mexican Film released in 1966. Each film fragment shows images of 1950’s and 60’s Mexican Modernist architecture, either interiors, facades or streetscapes.

The source film, Despedida de Casada (Dir. Juan de Orduña), is treated as a document of the contemporary city, and is re-edited to show off the architecture of Mexico, such as the Museum of Anthropology, the apartment buildings of Avenida de la Reforma, and the Hotel Presidente in Acapulco.

The clips are interspersed with single frames which each capture an image of the architecture in pristine black and white, or dissolve to a perspective rendering (below right) like illustrations from an architectural monograph. Ciudad Moderna untangles the architecture from the narrative thread of the original film and recomposes a story of the city as a built environment.