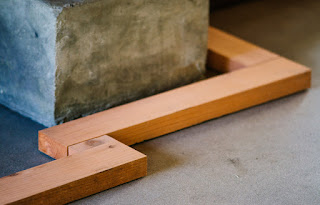 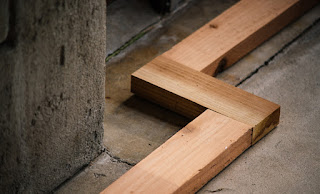 A Vast Furniture: Part One-MAK Center at the Schindler House
2015

I came to the Schindler House first as a visitor, walking the perimeter of the house as it exists now, a historic architectural space. Through subsequent visits I came to know the space and proposed a project that would involve a sculptural tracing of the walking perimeter at a 1:1 scale. I wanted to use untreated and freshly sanded redwood lumber to contrast the redwood in the house. The work is meant to be a conversation through material and time. The work would need two sites, one being in a desert, as a way to explore that which has been “compromised” by the first site. I wanted to give the Schindler house a horizon again, bringing forward the revolutionary ideas that helped shape the house. The conceiving of this project brought the MAK center for Art and Architecture and the High Desert Test Sites together.

Several things resonated with me as I continued to visit the Schindler House over several months . The first was a photograph of the house after it was built in 1922 within a vast landscape. Second was the idea of the house being conceived while on a camping trip to Yosemite. I became very interested in the shape being influenced by that relationship to landscape. The patios and the way they were used as dining room and living room while the site was a residence expanded my notion of the plan in terms of shelter. The idea of comfort was being challenged through Schindler’s architecture, isolation from the exterior, conventionally equated with comfort, was completely being questioned. Lastly, a quote made by a member of the Friends of the Schindler House about how the site had been compromised. The quote was a proposal that instead of trying to preserve in situ the now deteriorating building ( in the 1970’s), that they should allow it to be demolished, sell the valuable land for a hefty sum, and rebuild the house elsewhere on less pricy real estate.

My personal connection to the house developed through the making of the to-scale cardboard template for the work. After spending a day and a half on the floor, on my knees, fitting the pattern, I felt the house shift. It felt vast and spacious and very tactile. I had been touching its floors for hours and the space somehow felt familiar and known and that brought a new understanding of it. I no longer felt like a visitor after that.

I collaborated with curators Anthony Carfello, Adam Peña, and Aurora Tang to develop events that would allow for different experiences and interactions with the artwork. I wanted to work within Schindler’s architecture and use it as a framework to expand from. These events are extensions of the artwork. The programing helps to connect the two sites and through the connection, to explode the site into a larger conversation about the development of housing and land ownership and notions of the frontier throughout different points in time.