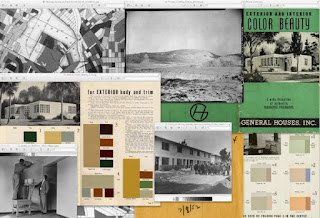 In its ninth iteration, the MAK Center’s Garage Exchange Vienna-Los Angeles exhibition series brought together former artist-in-residence Karina Nimmerfall and Los Angeles-based artist Morgan Fisher. Looking back at housing and urban planning in the U.S., the two artists revisited two historical moments: the dreams of home ownership via mass-produced, modular houses like those of architect, engineer, and city planner Howard T. Fisher and his company General Houses, Inc. in the 1930s; and, two decades later, the losing battle for a community-based modernism in the form of social housing, represented by the abandoned master plan for Richard Neutra and Robert Alexander’s Elysian Park Heights housing project in Chavez Ravine.

With the installation 1953. Possible Scenarios of a Discontinued Future, Nimmerfall created a multi-layered investigation into an unrealized social vision for a new modernist utopia—conceived of as a city within a city for a working class population of 17,000—on the site of the displaced communities of La Loma, Palo Verde, and Bishop. Intended as a prototype for future low-cost housing, the controversial project was met with a highly publicized attack on public housing, where anti-socialist polemic, private developers, real estate lobbyists, and the media all came together not only to dominate public opinion, but also to affect the housing debate on a national level. After years of detailed preparation, the visionary plan for Elysian Park Heights was scrapped in 1953, and replaced by plans for Dodger Stadium, and private enterprise in general. The story of this housing project exemplifies the end, as well as the beginning, of a new era. After World War II, the socially concerned modernism of the left emerged from its own battles with a new corporate aesthetic and a much more ambivalent ideology, giving way to neo-liberal urban development practices.

Beginning with present day footage filmed on location at the former site of Neutra’s progressive, yet later razed, Channel Heights housing project (San Pedro, 1942), Nimmerfall’s short film traced history forward to the Los Angeles County Museum of Art, Elysian Park, and Dodger Stadium, as well as to Neutra’s own house in Silver Lake, “projecting” the various built architectures into the site once designated for Elysian Park Heights. Inserted into an architectural installation based on abstract fragments of Neutra’s design, the film was accompanied by a fictional narrative with a script assembled from historic quotes taken from a variety of archival sources. Put into dialogue with one another, the quotes formulated a lively discussion, bringing to life the opposing ideas and heated atmosphere at that specific time. Through this overlap of text, film, and installation, Nimmerfall created a portrait of an actual, yet imaginary, space that offered a range of visions relating to the city’s geographic and cultural past, present, and future.

In conversation with Nimmerfall’s installation, Morgan Fisher’s painting 4 (Silver Gray, Sky Blue, Terra Cotta, Red) displayed an enlarged facsimile of a paint chip showing color combinations from the booklet Exterior and Interior Color Beauty, a publication produced around 1935 by General Houses, Inc. Founded in 1932 by the artist’s father, General Houses aimed to design, sell, distribute, and erect low-cost, high-quality prefabricated homes, in an attempt to reinvent the American homebuilding industry. Howard T. Fisher’s idea was to create a system that made it possible to build houses the way General Motors built cars, setting up a business model where production was substituted by coordination and management; different components were made by different companies and assembled on site, a process intended to make houses affordable for everyone. Although General Houses did not succeed in the mass market, it nevertheless represents one of the first attempts in the U.S. to make modern, industrialized houses available to all.

A color consultant was employed to choose the colors found in Exterior and Interior Color Beauty, in order to create combinations that were considered pleasing, and which would harmonize and coordinate with each other. The combinations formulate a sequence that the booklet calls a “color-flow” for an entire house, rationalizing relationships amongst colors in the realm of the decorative. At the root of such rationalization was the imperative to limit choice, to simplify, and to streamline. With Morgan Fisher’s discovery of the booklet and the actual paint chips, along with his strategic desire to make work that escapes the pitfalls of composition, he created a visual reverberation emanating from industrial production’s intricate and complicated history of standardization.

Los Angeles-based artist Morgan Fisher achieved widespread recognition in the early 1970s for his experimental films that deconstructed the language of cinema both as physical material and as a set of production methods and technical procedures. Since the late 1990s, Fisher has focused his attention on the problems and possibilities of painting, by questioning and reframing the subtle conventions of the medium with an equally rigorous self-reflexivity. Recent solo exhibitions were held at the Generali Foundation, Vienna; Aspen Art Museum (2012); Raven Row, London; Museum Abteiberg, Mönchengladbach (2011); and Portikus, Frankfurt/Main (2009).