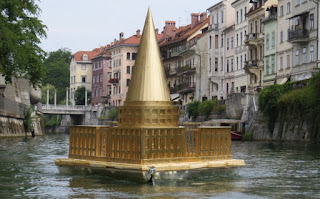 The famous slovene architect Jože Plečnik, who also was in charge of redesign today’s “Three Bridges” in Ljubljana, Slovenia, proposed in 1947 a design for a new Slovenian Parliament in Ljubljana during the second Yugoslavia. However, his design was rejected because of financial, logistic (it would have been necessary to demolish a lot of medieval buildings) and style matters. That is why another contest was released, this time with an open call, to find a final design and the winning project it’s today Slovenian Parliament. Despite of this, Plečnik’s design was recorded in many slovenian minds and today can be seen in 10 cent coin of Slovenia, even if the project never was developed.

My project consisted in reconstruct a model of Plečnik’s design in light materials (such as cardboard) and covered in water proof materials. The model was installed on a raft across the Ljubljana River. This way it wasn’t just the first time the building had a volumetric presence in the city, but it also “visited” different places without the possibility of been in one place for long, because there is no room for it in the urban design of the city. This project it’s about a building with no space to be that will move aimlessly across the waters of Ljubljana.