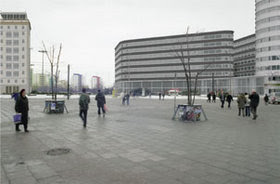 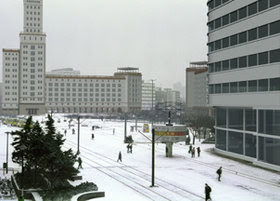 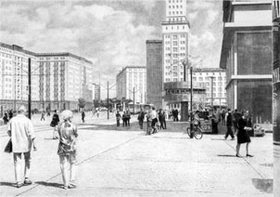 Two Variations on the History of Alexanderplatz.

Having won the 1928 competition, the Luckhardt Brothers with Alfons Anker were comisioned to realize their design. Through generous investment by American backers, the building is finished in 1932. Because of its unified, modern and dynamic form, Alexanderplatz achieves worldwide fame. During the war, heavy bombing destroys the east and north sides of the square. After 1945, a reconstruction of the square is considered, though the infrastructure had revealed itself as being too small already in the 30s. Consequently, only the two southern buildings are restored. In 1953 Ulbrich demands the adoption of the "National Traditions" style. Henselmann, though only a few weeks earlier an ardent Modernist, responds as head of a working collective with a proposal for Stalin-Allee and Alexanderplatz. There is an urgent need for representational government buildings, so work on Alexanderplatz is started immediately and finished within two years. The central commitee of the SED move into the middle building at the north end of the square which is now set aside for parades and rallys. Upheavals in the USSR and the consequent set backs prevent Stalin-Allee being built in a similar style; therefore the planners resort to a cheaper Plattenbau (prefabricated units) method. After the reunification, Alexanderplatz is accused of being Stalinist and eclectic, however with the emerging interest in historicising town planning, the square is listed.
http://www.galeriekamm.de/
Posted by Fabrizio Gallanti at 15:13