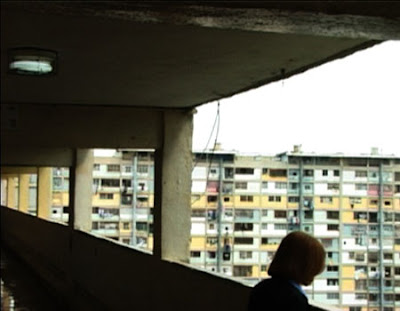 In the video, Caraqueños are interviewed about the everyday use of two megastructures – the new Constitution of the Bolivarian Republic of Venezuela and the insurgent and informal urbanism of the historically and politically central 23 de Enero. The answers of the architects, social activists, governmental experts, artists and people who live in 23 de Enero who are interviewed examine the relationship between these two productive forces which shape Caracas. The problematic of appropriation is overturned – the limits of appropriation are challenged by new spatial and social relations that smash the program of the oppressive local modernism and open up to greater social participation.

The development 23 de Enero is the largest and most important public housing project ever implemented in the Venezuelan capital Caracas. Under the dictatorship of Perez Jimenez Venezuelan architect Carlos Raul Villanueva designed and built a modernist megastructure of 80 apartmentblocks.
From 1952 to 1957 the urbanization reshaped the city´s surface but didn't change the precarious political and social situation of its inhabitants.

In 1958, during the uprising against the dictatorship of General Pérez Jimenez, 4000 of the 9000 apartments in the unfinished superblocks of 23 de Enero were squatted by campesinos and the poor. Since then, "23rd of January" has been a highly politicized and well-organized urban site which hosts radical social movements and organisations.

In retrospect, mass-sqatting and the appropriation of space could be looked at as an insurgent participatory practice similar to what was proposed in Europe in the seventies as „participatory architecture."

But, in Venezuela today, participation is associated with the making of the new national constitution in 1999. "Participatory Democracy" is one of the major projects of Hugo Chavez Frias, the elected president since 1998, who is leading the process of social, political and economic transformations.
Investigating both public housing and the state constitution as megastructures, the limits of appropriation and everyday use are challenged by new spatial and social relations. Encouraged by the constitution new practices alter the program of the oppressive local modernism and open up to greater social participation.

Posted by Fabrizio Gallanti at 13:43