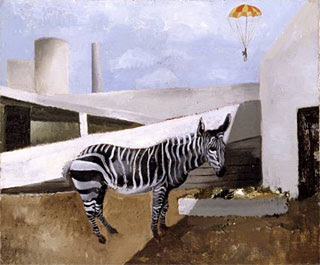 By the late 1920s, Christopher Wood was part of the Parisian avant-garde and had become fairly responsive to the prevailing currents of vanguard art. Painted shortly before his death, Zebra and Parachute is an important and intriguing picture. The faintly surrealist juxtaposition of International Style architecture, zebra and parachutist was a departure from the primitivist subject matter and naïve style that he had pursued hitherto and perhaps indicates the path he would have taken had he lived.