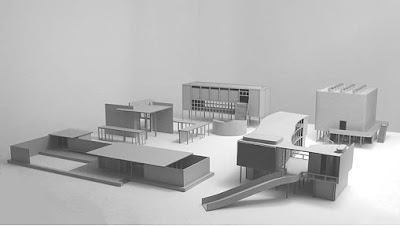 5 Notable Pavilions, 2003 - 2005
Video Projection. 4.20 minutes, looped
Digital Print in Light Box. 56 x 147 x 15 cm
5 Notable Pavilions is a video and photo document of a largearchitectural maquette. The maquette is made up of scale reproductionsof Modernist pavilions, such as Mies van der Rohe's 1929 BarcelonaPavilion, and Jose Luis Sert's 1937 Spanish Republic Pavilion.Architects have used the exhibition pavilion as a vehicle to experimentwith formal and technological concerns without the demands of a seriousfunctional program.
The video is shot in a series of four slow pans, at ground level,giving the viewer a model-scale eye-level tour, and creating a formaland tonal study of the group. Each pan is separated by a warm red"wipe". 5 Notable Pavilions is a study of how architecture isrepresented through movement. It brings together several forms ofrepresentation: The film, the architectural maquette, and the pavilionitself. This video work is displayed with an adjacent back-lit print asa kind of "establishing shot" of the whole group (Photograph by RayAnastas, Camera: Rubén Guzman, Edit: Anita Chao).