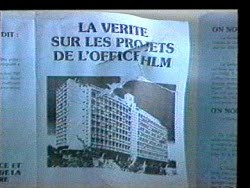 Shot in a Le Corbusier housing project, Firminy-Vert, in south central France, this tape traces its history through an exploration of the way in which residents live in and with it as an architectural entity. Called by its residents Le Corbu after its renowned architect, the complex was built after his death. The wing in which the tape was primarily shot had been closed for over ten years, thus enshrining the decor of the late 1960s when the building was opened. The mayor of the town, who had facilitated its development, subsequently tried to have the complex destroyed. The tenant association president describes the struggle — only half successful — to save the building. The tape shows the closed wing, the signs and detritus of lives long past, followed by interviews. The opening sequence of views and snapshots is silent. Here is the space for an unspoken text about architecture and the warring interpretations of Le Corbusier's idea of a human, humane, humanizing space. In English and French without translation.