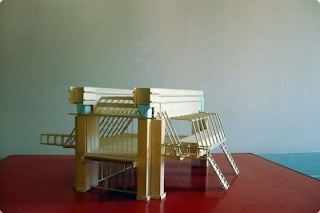 
The English artist Charlotte Moth has decided to make a model out of a very interesting and popular building in Saint-Ouen, a covered ice-skating ring.
From the sixties on, the famous architect Paul Chemetov conceived and build many social and public buildings, among them this famous ice-skating ring, in 1975. This multifunctional building in the center of the suburbian town of Saint-Ouen, as much as beeing a leisure place, serves as a shelter, as much as a commercial center and a parking.
Strongly apparented to science-fiction novelist Ballard and the aesthetic of Blade Runner, the building has is fascinating for it’s structural method and anticipated many furtive architecte of our time. The anachronism the building transmit has therefore struck the imagination of the artist Charlotte Moth.
I discovered the Patinoire of St Ouen because I lived here between 2007 - 2010. I was always struck by this building, as it is so different to many of the other buildings that I have lived near, and seen on a daily basis. For Lavomatic, which is also the studio space of Seamus Farrell, I wanted to develop a work that related the physical proximity of the Patinoire to Lavomatic, (the Patinoire is situated at the end of the main road from which Rue Claude Monet stems).
Following a visit with Cécile Bourne-Farrell in June of this year, to the architectural office of Paul Chemetov who designed the Patinoire in 1975. I became more and more interested in the model of the Patinoire that I discovered through a series of photographs. The original model of the building was not to be found.
I decided that I would like to re-contstruct the model to the best of my abilities through looking at exsisting images of it. My model in this sense functions as a three dimensional drawing, a sculpture. Displayed in the window space of Lavomatic the sculpture will be simply lit.