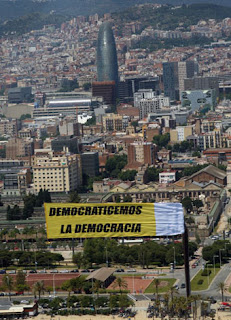 Daniel Garcia Andújar carried out the action Democraticemos La Democracia (Let’s democratise democracy) in Barcelona in 2011. An aeroplane trailing a banner with the slogan in the title flew along the city’s coastline. The action was photographed from another aeroplane. Unlike from ground level, here the slogan does not appear against a blue sky, but against the skyline of Barcelona. When the Torre Agbar (Spain’s highest building, designed by Jean Nouvel) appears on the horizon together with the banner, this is a clear comment against trivialising the city with the notion of the Iconic City – and in favour of enhancing its function as a place where communities are articulated and constituted: let’s democratise democracy!

via Württembergischer Kunstverein Stuttgart
Posted by Fabrizio Gallanti at 22:06