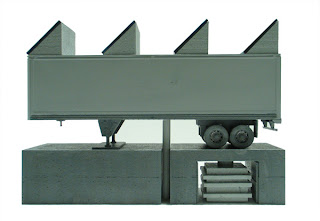 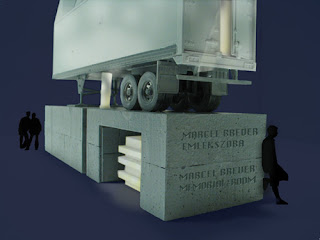 Marcel BREUER MEMORIAL-ROOM
Winner of BREUER IN PÉCS / BACK and FORTH - public art competition in memory of Marcel Breuer
2010, public art project (has not been realized)

The Marcel Breuer Memorial-Room is the winner of a public art competition by the city of Pécs - the European Capital of Culture in 2010 - in memory of Marcel Breuer. Breuer was born in the city of Pécs, but emigrated at a young age, lived, worked and rose to fame as a "self-made man" at the Bauhaus school and later on in the USA. The Memorial-Room manifests the lack of Breuer's presence in Hungary. It also questions whether a city or a country is entitled to grace themselves with and hog credit for a man's fame, whose life and work is more or less independent from his birthplace and erect a memorial for them. The memorial room is the 1:1 concrete replica of a container, that might as well have been imported from across the Atlantic (just like Breuer's fame). It is designed as a compact, independent and self-sufficient module with solar panels and a sewage tank. The concrete (a material favoured by Breuer) is in case of the Memorial-Room a light-transmitting concrete, a contemporary invention by a young Hungarian engineer. The solar panels mounted on top of the container make the light-transmitting concrete module glow "from the inside" when it gets dark – a strong contrast to the usual Hungarian memorials of figural national heroes illuminated by floodlights pointing at them.

Posted by Fabrizio Gallanti at 19:48