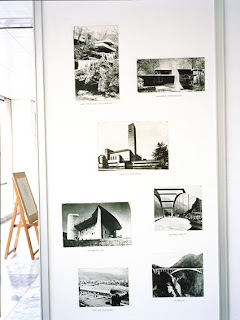 Pyongyangstudies II documents those twenty-five plates exhibited at the state academy of architecture in Pyongyang that bring together countless icons of world architecture: from archaic druid stones (1000BC) to the Guggenheim Museum in New York (1943–59, Frank Lloyd Wright) to Kenzo Tange’s City Hall in Shinjuku/Tokyo (1991). The exhibition initiated by Kim Jong-il, the supreme leader of the People’s Republic of North Korea from 1994 to 2011, spotlights the principles of reconstruction of the North Korean capital in the wake of the Korean War. An illustration also photographed by Martin Eberle, in turn, visualises the underlying urban concept: a rationalist-modernist model of the city comprising a number of “landmarks” from a wide range of historical styles.

via Württembergischer Kunstverein Stuttgart
Posted by Fabrizio Gallanti at 22:08