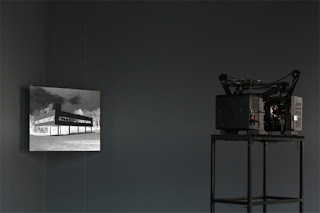 The Museum Villa Stuck is pleased to present Amie Siegel: Double Negative, the first large-scale exhibition of American artist Amie Siegel, establishing correspondences between seven of the artist’s works spanning a decade (2005–15) and including a newly commissioned film installation that gives the exhibition its title.

Known for her layered, meticulously constructed works that trace and perform the undercurrents of systems of value, image-making and methods of observation, Siegel’s work moves between film, video, photography, performance and installation. The artist’s particular attention to the past, and the unfolding of time, provides the starting point for the exhibition’s structure: a series of “ritornellos,” reflexive passages of repetition and difference—Siegel, to quote Deleuze, “makes, remakes and unmakes” her works “along a moving horizon from an always decentred centre, from an always displaced periphery which repeats and differentiates them.”
The new commission Double Negative (2015) proposes ruptures between original and remake, artefact and copy, collection and preservation. Two 16mm films simultaneously project images of Le Corbusier’s iconic white Villa Savoye outside Paris, and its doppelgänger, a black copy located in Canberra, Australia. Each film has been printed on 16mm stock as a negative image, or polarity print, thus reversing light and dark. The Antipodean black Villa Savoye is, in fact, an ethnographic institute, dedicated now to the digital duplication of its extensive collections of anthropological films, photographs, slides and sound recordings, as Siegel reveals in a high definition colour video. The work enacts the infinite loop of recorded artefacts—the urgency to document and record “vanishing” rituals and cultural practices becomes instead the contemporary archival impulse to copy vanishing media formats to digital. These concatenated elements extend the artist’s engagement with architecture as a foil, enacting and revealing across constellation-like works, layered sociological and aesthetic concerns.
Posted by Fabrizio Gallanti at 17:45