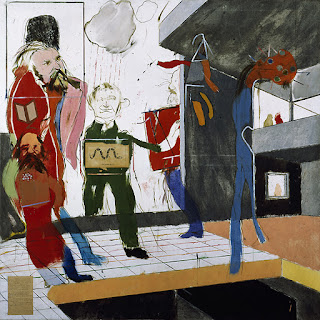 This surreal painting was inspired by the historic dinner in London to which the American consul invited a dozen of exiled revolutionaries in 1854. Kitaj puts the wild men - the anarchists Michail Bakunin (1814-1876) and Alexander Herzen (1812-1870) - into an elegant and modern architectural setting.

The painting "The Red Banquet" is exemplary of the artist's way of thinking and working. Kitaj combined motifs from different sources in such an unconnected and unexpected manner that the painting seems to be composed of mental leaps. Kitaj became familiar with this principle from the work of the surrealists, the American poets Ezra Pound (1885-1972) and T. S. Eliot (1888-1965), and Walter Benjamin, who he had discovered early on as a great "fragmentist."

While studying in Oxford in the 1960s, he first encountered the iconography of the Warburg Institute in London through Professor Edgar Wind. The icons hearken back to Aby Warburg (1866-1929), who published a remarkable inventory of pictures in his "Mnemosyne Atlas". Warburg's thesis that magic and logic share a common origin coincided well with Kitaj's thinking.

"The Red Banquet" is one of the first London pictures in which Kitaj inserted handwritten commentary as a collage form. In the commentary, Kitaj quotes from a publication on the historical banquet and explains the composition of the painting as well as the different sources of the collaged pictures:

"In February 1854, Mr. Saunders, the American Consul, gave a banquet to a dozen of the principal foreign refugees in London. Among the guests were Alexander Herzen, Garibaldi, Mazzini, Orsini, Kossuth, Ledru-Rollin, Worcell, and other refugee leaders. The party was completed by the American Ambassador James Buchanan, a future President of the United States.
Herzen is apostrophised on the left in this picture with the image of Michael Bakunin planted in his midsection.... (Bakunin was not present but arrived in London late in 1861.)
This 'Red Banquet' is described by E. H. Carr in his book The Romantic Exiles (Penguin, 1949). The scene has been set in a house based on a photo of Le Corbusier's house at Garches, near St. Cloud, 1927-28."
Posted by Fabrizio Gallanti at 16:43