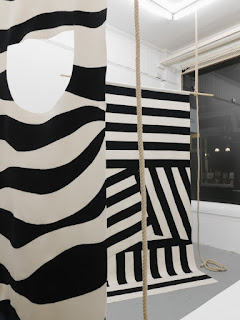 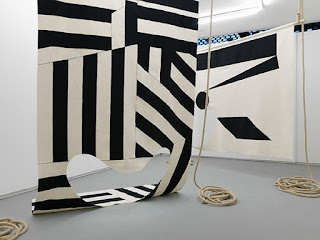 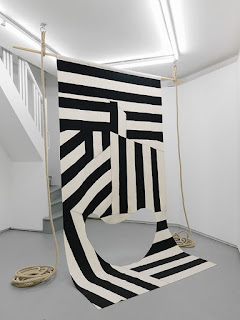 Erika Hock “The Seamstress, Her Mistress, the Mason and the Thief” installation views at Tenderpixel, London, 2014.

Erika Hock’s practice is characterized by the fluid crossover in between sculptural and architectural elements, as well as a recent extended interest in tapestries and furniture that investigate meeting points between history, society and culture. Invested in discussions surrounding functionality and aesthetics, interior design and the perception of the body to the built environment, formed specifically for this exhibition Hock has centered her research upon the anecdotes surrounding Adolf Loos’s design for Josephine Baker’s house. Josephine Baker’s body as well as the building designed for her has become the subject of various studies, particularly in terms of understanding them as a surface for projecting modernist ideas at the convergence of art and architecture; theatricality and voyeurism. Hock’s playful panels of black and white felt reimagine the architectural body to the detail of the peeping widows as eyes, while evoke a playful theme of jazz. Treating the subject more generously, much like Sonia Delaunay’s and other early 20th century avant-garde artists’ textiles, they don’t describe a scene, a space or a character, but become it. Existing in between sculpture, wall based work and architecture, the tapestries explore the body’s relation to objects’ shape, form and scale through active presence and participation in the space.
Posted by Fabrizio Gallanti at 18:07